Off to College: Parental Separation Anxiety 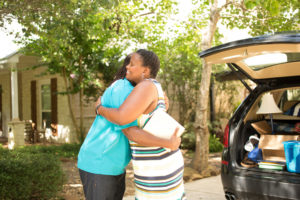 Come September, many young people will be leaving home to go away to college. Students and parents are excited about this new journey. But in addition to the excitement, there is often anxiety about moving out of the comfort zone of home and family. While the focus is often on the separation anxiety the student experiences at this milestone, too often we neglect the parents’ separation anxiety.

From watchfulness to surveillance, parents retain a varying degree of control over their high-school-aged children. But when a child goes off to college, the ability to know what is going on in that child’s life depends on the child’s willingness to communicate and share information. Since it is developmentally appropriate for college-aged children to be separating and individuating from their parents, we can expect that many children will share less than parents might be hoping to learn. Not knowing, in areas where there was previous information, makes parents more anxious.

Parents express many different worries about how their children will manage when the parent is no longer so present in their lives. Anxieties may be about drugs and alcohol, or there are concerns about social and academic problems. Parents with children who may already be dealing with emotional issues, eating disorders, or learning disabilities can feel especially anxious.

It is to be expected that a parent would worry about how their child will manage on their own in college. This is appropriate and shouldn’t be confused with a parent’s separation anxiety. When a parent feels the need to contact the child repeatedly, can’t sleep, can’t stop thinking and wondering how the child might be feeling or what the child is doing, the parent may be experiencing separation anxiety. When we think of the child’s separation anxiety we understand it to be about the feeling that “I won’t be alright without my attachment to my parent.” For the parent, it is much the same: “I won’t be alright without my attachment to my child.” Parents experience their anxiety as being about the worry “Is my child going to be okay?” But what they often fail to be aware of is that they may be even more anxious (consciously or unconsciously) about their own well-being. They wonder, “Am I going to be okay?”

Learning to Detach and Individualize

In my therapy practice, I have had the opportunity to work with many parents who have struggled with the separation and individuation of their children. One father, “Seth,” began therapy when his daughter, “Kristin,” was applying to college. He spent many of his sessions talking about Kristin and her college application process. He was very troubled about Kristin keeping him out of the decision making.

Sadly, with tears in his eyes, Seth told me, “She comes home and closes her door and goes on that computer and researches where she wants to go. Her mom and I ask her about her choices, we tell her we need to be part of the process; we remind her that we will be paying a good part of the tuition. She just gets irritated and says she wants to do this on her own and she’ll let us know what she decides.”

Recently, Seth came into my office for his therapy session looking very distressed. He immediately said, “I can’t believe that girl. All of her college acceptances have come in and she has decided to leave New York and go to school in Arizona. That’s much too far away. We’ll never see her! I told her she couldn’t go and she got so mad. She started screaming at us. She said she hated us, that we were terrible parents and never let her have what she wants! She was so mean!”

Seth started to cry softly and, almost in a whisper, said, “I’m so scared. I love her so much, I can’t stand this. It feels like we’ve lost her forever. She’ll never come home. If I don’t agree to pay, she said she would pay herself. She did get good financial aid from them and I don’t think I can play the money card. What am I going to do?”

I asked Seth, “What makes you think Kristin is lost to you forever?”

Seth answered, “We used to be so close when she was younger. She was daddy’s little girl. Her mom worked more than I did and I took her to soccer, to swimming; I helped her with her homework every day. She would tell me about everything — even the boys she had crushes on! Then in her sophomore year of High School, she got more secretive. She started going out with Jeremy and was becoming more social. I could understand that she needed some space from me. My wife and I used to talk about how grown up she was getting. We started to check what she was doing and who she was talking to on her cell phone and computer. There are a lot of scary possibilities out there. She never found out we were keeping tabs on her, but she started to become easily irritated and annoyed around us. She would get on my wife’s case about the food she was cooking and she gets annoyed with me when I ask her about almost anything.”

Seth began to sob, “I can’t eat, can’t sleep. What will I do without her? She is my only child. So much of how I think about myself has to do with my being a father. If I lose her, can I still be a father? What kind of a father could I be without my daughter?”

I reminded Seth that we had been talking about how it made him anxious to think of his daughter having a life so separate and different from his. A lawyer, Seth had followed his father into the law and joined his father’s practice after completing law school. After he married and Kristin was born, he moved into an apartment in the same building as his parents. He understood that his model of parent-child relationships was a reflection of his own experience.

Seth acknowledged what we had been discussing: “I know I grew up very close to my parents, especially my father. I would never talk to him the way Kristin talks to me. I always respected him and needed him for guidance and that gave me such confidence and comfort. It’s not like I thought Kristin had to become a lawyer, but I did hope she might. But she has no interest in it. She wants to major in art, which is fine, but I really don’t get what her art is about. She makes these things out of paper and wood. I try to act interested, but, really, where is that going to get her? How will she make anything of herself? How can I get her to pay attention to what I think? I’m her father.”

Separation Is Not Rejection

Seth’s struggle illustrates many of the issues parents have to contend with as they try to become less anxious about their children differentiating from them. Seeing one’s child as different, as having a separate self with separate desires and ideals, can give a parent the feeling of being rejected. When parents have this experience it is essential to be clear that difference does not signify a child’s rejection. What keeps parent and child attached is not sameness. Sameness can often give parent and child the feeling of closeness, but a very different kind of attachment occurs when there are two separate, different people who are connected by the feelings they have for each other.

For the parent who has felt this sameness with their child but now recognizes that their child is differentiating, there can be painful and frightening anxiety as they try to figure out how to understand and relate to this separate differentiated person. For parents who have not differentiated from their own parents, this can be especially difficult.

Seth is beginning to consider that he can come to know and appreciate his daughter with all her differences. As he begins to relax with the belief that he can know and love this separate person, he is becoming aware how scared he has been that maybe she wouldn’t continue to love him. Seth is only one example of a parent struggling with separation anxiety. One reason I believe Seth is less anxious now than when we began our work is that he has been able to identify that he is feeling separation anxiety.

Many parents who are worried when their children go off to college, are not aware that they are experiencing an emotion that is not simply based on the practical worries of safety or performance or the well being of their children. They have not recognized that they have been afraid that their children would move away from them emotionally, become different in a way to make their attachment feel less close and loving. Realizing this, thinking about separation and individuation as a developmental necessity, not a personal affront or wrenching loss, can help many parents resolve much of their anxious feelings.