Now That DOMA Is Dead, the Kids Are Even Better 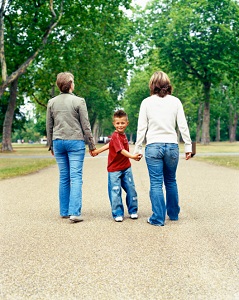 On June 26, 2013, the U.S. Supreme Court struck down the Defense of Marriage Act (DOMA), citing the welfare of children as part of its rationale. The majority concluded that DOMA “… humiliates tens of thousands of children now being raised by same-sex couples. The law in question makes it even more difficult for the children to understand the integrity and closeness of their own family and its concord with other families in their community and in their daily lives.” (United States v. Windsor, 2013)

Although policies and practices cited as being “for the children” are often anything but (i.e., high-stakes testing in education), doing away with DOMA is genuinely good for the children of this country. The American Academy of Pediatrics, the American Medical Association, the American Psychological Association, and many other professional associations have looked at the research and concluded that children of gay parents do just as well as children of heterosexual parents. Now that DOMA is a thing of the past, perhaps all children will be better off.

Certainly, children of gay parents are better off. They no longer have to live in a world where the federal government says that their parents’ marriages are not as legitimate as the marriages of their friends’ parents. These families will have greater financial security; they will be able to take advantage of all of the same tax benefits that heterosexual married couples have access to; and they won’t have to worry about getting hit with a crippling estate tax should a parent die. These children no longer have to fear any number of potential catastrophes associated with the federal government’s failure to recognize their parents’ marriages. Children of gay parents, who are already doing just fine, will be bolstered by their families’ increased safety and security.

Gay children also will benefit from the court’s decision. Children are deeply impacted by what they hear adults say about gay people and by how they see gay people being treated. When gay children hear their parents, or other adults, speak in a derogatory way about gay people, they internalize those words and apply them to themselves. It creates a belief that they are somehow defective, inferior, and generally unacceptable. The long-term implications of this belief being planted at such a young age are as severe and numerous as the beliefs are untrue. As these children grow older and learn about government-sanctioned discrimination aimed against them, it only validates their negative beliefs about themselves. With the demise of DOMA and the battle for marriage equality spreading throughout the states, gay children have solid grounds upon which to question the negative messages that they have received. Gay children growing up today can dream not only of their own wedding day, but of a full life out of the closet, unashamed and proud of who they are.

Finally, while the fall of DOMA may not have a direct impact on heterosexual children of heterosexual parents, they benefit too. Equality is good for everyone. Diversity of all kinds creates a richer culture and exposure to differences that can expand one’s worldview. As marriage equality and other LGBTQ rights continue to be established across the country, people will be freer to live lives that are authentic. Authenticity is a cornerstone of mental health; the healthier we are, the stronger our country will be.

It would be naive to believe that the death of DOMA will put an end to bigotry and discrimination. Brown v. Board of Education didn’t eradicate racism, but it was a landmark victory in the civil rights movement that paved the way for further victories. Likewise, the end of DOMA is a tremendously important victory in LGBTQ rights, and it will pave the way for more victories in the fight for full equality. Imagine how much better our children will be when full equality is achieved.