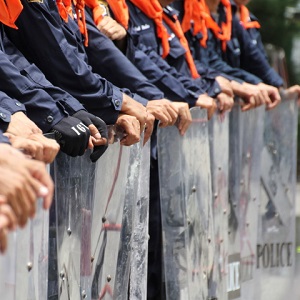 Groups can help people feel more powerful and less isolated, making it easier to act on values shared by the group. While groups can be a powerful force for change—such as when a group works together on a volunteer project—groups can also spell disaster for group members and group outsiders. Mass suicides, ethnic cleansing, and the horrors of the Holocaust are just a few examples of the havoc wrought by groups.

Groupthink, a term coined by psychologist Irving Janis in 1972, is used to explain and categorize the seemingly irrational behavior of groups. New research aims to explain groupthink, and has found that groups can cause people to disconnect from their values.

The Trouble with Groups

Mina Cikara, the lead author of the study, first became interested in groupthink after experiencing some group harassment of her own. While visiting Yankee Stadium, both she and her husband were mercilessly harassed for wearing Red Sox hats. Cikara felt that she was being attacked as a member of a group, not an individual, and became curious about the ways group membership changes behavior. While the heckling Cikara experienced might seem relatively unimportant, this sort of groupthink can lead to much greater crimes—abuse, war, homicide, rape, and even mass suicide.

Cikara and her team believe that joining a group can cause group members to lose touch with their own values. To test this hypothesis, researchers examined brain activity in a part of the medial prefrontal cortex associated with thinking about oneself by using a functional magnetic resonance imaging (fMRI) machine. The test group was then asked to participate in a competitive group activity. People who participated in the competition showed diminished brain activity in the brain area associated with thoughts about oneself. This group was also more likely to express aggression toward competitors.

The research team hypothesizes that groups cause people to think less about themselves, and therefore to lose touch with their own values. However, according to the researchers, this is only one piece of the groupthink puzzle. Cikara and her team point out that groups also promote anonymity, reduce personal responsibility, and enable people to frame unethical actions as necessary for the greater good of the group.