Neurofeedback as a Treatment for Traumatized Military Veterans 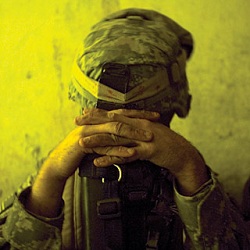 As we prepare to celebrate our country’s upcoming Independence Day, it seems appropriate to speak about a complementary and alternative medicine (CAM) therapy, neurofeedback, which is currently being used to treat veterans who have symptoms of post-traumatic stress disorder (PTSD)1.

What is Neurofeedback?
Neurofeedback, also referred to as EEG biofeedback, provides information about the brain’s electrical activity via a computer program. This technique enables a clinician to tell whether one is asleep (delta), alert (mid-beta), anxious (high-beta), meditating (theta), or daydreaming (alpha), etc., by examining what brain frequencies predominate at a given time. Various disorders are associated with brain frequencies that are too fast or too slow for the type of activity in which one is engaged. As an example, in order to pay attention in school, one would want the predominant brainwave pattern to be mid-beta (faster, but not too fast), rather than theta (fairly slow). Admittedly, I am painting an oversimplified picture but it conveys the general idea.

How Does Neurofeedback Work?
Training with neurofeedback consists of attaching electrodes to the scalp to assess current brainwave activity. The computer then rewards brain activity that is in the desired frequency range (e.g., alpha, mid-beta, etc.). Rewards may come in the form of audible tones or changes in on-screen imagery and the like. Some programs reward the brain by playing a favorite DVD when one is in the desired range, stopping otherwise. In psychological terms, this is referred to as operant conditioning.

Much of the research support for neurofeedback has been for the treatment of ADHD; however, neurofeedback has also been used to treat other conditions, such as anxiety, headaches, and sleep disorders. To date, there has not been a tremendous amount of research on the above, and so the treatment is not yet widely accepted. Nonetheless, many people have experienced promising results from using neurofeedback.

Post-Traumatic Stress and Military Veterans
PTSD is a type of anxiety that occurs following exposure to an event where one’s life or safety, or the life or safety of another, is endangered. PTSD and other emotional difficulties have become of significant concern in veterans returning from war. This makes sense given that vets have experienced events most civilians would find unimaginable. Although the lifetime prevalence of PTSD among American men and women in the general population has been estimated at 3.6% and 9.7%, respectively, returning veterans’ estimates are considerably higher. Specifically, a large scale study of veterans deployed between 2001 and 2005 found that at least 18% had developed PTSD or major depression.2 In a national survey of Vietnam veterans, the lifetime prevalence rate of PTSD was nearly 31% for men and 27% for women3. These numbers are staggering and cause for serious concern.

The Impact of PTSD on Veterans and Their Families
Symptoms of PTSD include, but are not limited to having flashbacks of the trauma and avoiding situations that remind one of it, as well as feeling “wound up” or easily startled, irritable, or emotionally cut off from others. PTSD symptoms can interfere with sleep, as well as prevent one from enjoying things that were once pleasurable. People with PTSD may also experience uncomfortable physical symptoms, have difficulties in their close relationships, develop problems at work, and may use substances like drugs or alcohol in an effort to dull their emotional pain. Obviously, the cost to veterans and their families is significant. Family members may feel that the soldier who left is not the one who returned to them. Returning vets may feel unable to cope with the memories of what they experienced, have difficulty articulating their feelings, and fear they cannot be helped.

PTSD can be challenging to treat adequately, however, treatment is necessary to help sufferers begin to heal, try to regain normal functioning, and prevent further problems. According to Dr. Siegfried Othmer, who has generated much of the literature about this modality, neurofeedback training can help regulate the mind and body by rewarding the brain for moving into calmer states (reflected by a shift to a predominance of slower brainwave frequencies). Although more research is required to better understand the limits and potential benefits of neurofeedback for PTSD, preliminary research, published case reports, and anecdotal evidence suggest that this treatment is promising.

The New York State Psychological Association has information about accessing help for soldiers with PTSD, as well as their families:
http://www.nyspa.org/index.php?option=com_content&view=article&id=276:post-deployment-stress-helping-veterans-and-their-families&catid=119:stress&Itemid=509