Does Marriage Cause Women to Drink? 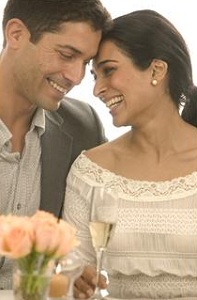 Some women may say that being married causes them to drink more because their spouses drive them crazy. Although this is usually spoken in humor, new research partially supports that claim. A study conducted by researchers from several universities found that married women consume more alcohol than single, divorced, or widowed women. Although the reasons may vary, and some may be the result of living with a difficult spouse, the primary factor that women cited for increasing their alcohol consumption was because their spouses drank. In fact, the majority of the women said that they enjoyed drinking with their spouses and wanted to maintain that sense of social connection. Men on the other hand actually decreased their drinking after they got married. The research found that men reported spending less time with their drinking buddies and more time with their wives, which drastically reduced the amount of alcohol they consumed. Some men said they drank less because their wives encouraged them to. Overall, the evidence showed an interesting trend in drinking patterns before, during, and after marriage.

When the researchers compared marital drinking to drinking behaviors after a divorce, they found that the patterns reversed. In general, women abstained from alcohol after divorce, while men increased their alcohol intake as a way of coping with the pain of the divorce. Corinne Reczek of the Sociology Department at the University of Cincinnati, lead author of the study, said that men may be more likely to cope with stressors in “externalizing” ways (i.e., alcohol use), and women may be more likely to cope in “internalizing” ways (e.g., depression). Another interesting finding was that women tended to report higher rates of drinking problems than men. In particular, the women were more likely than the men to attest to having had a drinking problem at one time or another. This could be due to the fact that the women increased their drinking during marriage and found that in comparison to their spouses, they were drinking in excess. Although these results identify unique drinking patterns in married and unmarried individuals, they also underscore the importance of determining the difference between healthy and unhealthy drinking behaviors.