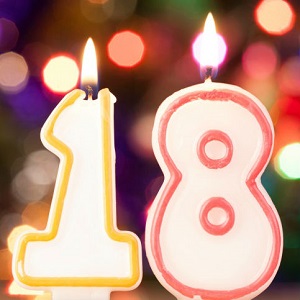 Over the course of a decade working therapeutically with adolescents and their families, I have observed countless young people as they reach a highly anticipated milestone in their lives: turning 18. I have also observed the parents of all those young people as they attempt to adjust to the transition that occurs when their “baby” officially becomes an adult. It has been my experience that a child’s 18th birthday is an especially potent event for families, and the ways in which families respond to this event, for better or worse, can form the basis for the launching of their child into young adulthood.

Of course, we all know why the 18th birthday is a really big deal: it’s the one on which Western culture bestows young people with most of the rights they will enjoy for the rest of their lives. These rights include moving about at will without restrictions, curfews, or the like; choosing friends and partners of whom the parents may not approve; signing contracts such as military enlistments, marriage certificates, and leases; borrowing money via loans and credit cards; obtaining or declining medical and mental health care; and quitting or enrolling oneself in educational programs.

Along with those rights, a number of new responsibilities are also bestowed upon each young person on his or her 18th birthday. For example, the young adult must actually uphold any contract that is signed, including paying back loans and lines of credit. Another new responsibility is that, legally, a person—even one who is still in high school—is treated as an adult rather than a juvenile within the legal system. The 18-year-old’s behaviors and choices carry consequences that are far and above what they have ever before experienced.

With all of the cultural and personal implications that hang on the 18th birthday, it is no surprise that navigating this milestone can challenge families. This is an event that can change, literally overnight, the power balances, rules, and expectations between parents and children. Families may spend months or even years nervously anticipating this change; conversely, they may be blindsided by the realities of parenting a child in this brand-new context, and find themselves dealing with unexpected consequences.

In some families, the 18th birthday is treated as a full stop to adolescence, and the newly minted adult is expected to (or believes he/she is ready and able to) immediately begin fulfilling many adult-like roles. The adult child may be expected to, for example, begin paying rent to the parents, purchase his or her own vehicle, or find a full-time job.

In other families, the cultural and legal implications of a child’s 18th birthday are treated as irrelevant inside the family fold; the family attempts to keep everything regarding their child, from rules and curfews to roles and communication styles, exactly the same as before.

In still other families, both the anticipation and actual event of a child turning 18 can become a flashpoint for family upheaval and conflicts. The newly adult child may use turning 18 as a springboard for rebellious or ill-advised shows of independence. Likewise, the parents may threaten the adult child with being kicked out, losing financial help, or other withdrawals of support in an attempt to enforce compliance with rules and expectations.

The “real world” is at once enticing and terrifying for emerging adults.

Many young adults have described feeling as if they’ve been thrown into the deep end of a pool once it sinks in that they are truly considered adults, and may often feel quite unprepared to meet the demands of the “real world.” At the same time, they are excited to flex some of their new independence and privileges, and may at times feel driven to act out adult-like roles and scripts the moment that they have the legal ability to do so.

One primary reason for this is that at 18, the young person’s brain is continuing to develop and does not yet function as a fully mature brain does. The brain’s reward system, governing the way that novelty- and pleasure-reinforcing neurotransmitters such as dopamine are released, peaks in activity in the late teen years. The prefrontal cortex—which aids with decision making, problem solving, and impulse inhibition—is not at its full level of function until the mid-twenties. The fact is, a young adult on his or her 18th birthday is not magically wiser, more resourceful, or more emotionally mature than he or she was the day before, and won’t think and act like a fully mature adult until a few years later.

To complicate the picture, there are almost always needs and dependencies that persist between the 18-year-old and his or her parents. For example, an 18-year-old who is still in high school cannot work full time even if he or she wanted to, and even those out of high school usually continue to be financially dependent. Shared health insurance, car insurance, family cell phone plans, and other matters of money and information mean that negotiating the leading edge of your child’s independence can be tricky at best.

Although we in Western societies now experience a more extended period of adolescent development and dependence than ever before, and although we are now more aware of the realities of brain development, the fact is that 18 continues to be the age of majority in the United States. The mismatch between the legal freedoms and the young person’s capacity to exercise them responsibly can create rough waters for families to navigate. Power struggles that exist between the child and the parents around the time of the child’s 18th birthday can quickly escalate into the child threatening to leave, and/or the parents threatening to kick the child out. The child may choose to do things that are legally acceptable, but are not acceptable to the parents who support him or her.

Every family will handle this transition differently, according to its own unique set of strengths, expectations, and history. However, there are a few rules of thumb that parents can keep in mind which may assist them in managing this major milestone.

The boundary around the family must be flexible—neither too diffuse nor too rigid.

First and foremost, resist the urge to threaten to kick your child out. The subject of your young adult child leaving home will often arise sometime within the months around his or her 18th birthday. You may find your child saying things like, “I don’t like your rules. I should go live with my friend where they don’t have these rules.” Often, by talking about (or threatening to) move out, the child is testing out ideas about being an adult, without any actual intention of following through on those ideas. The 18-year-old usually does not have the experience, wisdom, or resources to leave the home in a safe or well-planned way—and he or she knows it.

If your child does threaten to leave home, as the parent it is imperative that your response be one of reassurance that the child is still a part of the family and that the family home continues to be his or her home. Remember that your 18-year-old is struggling to adjust his or her self-concept to include adult-like roles, and mentally trying some of these on for size is developmentally normative. However, when parents respond to limit-testing behaviors by threatening to kick the child out of the home, the child feels insecure about the stability of the family system and his or her role in it; the boundaries become diffuse and the child becomes unsure about whether he or she can count on remaining a part of the family on which he or she remains largely dependent.

Another problem with parents threatening to kick the child out is that systems under stress tend to escalate to the most intense point of conflict during each conflict cycle. Once parents introduce the possibility of kicking the child out, it is likely to become incorporated into every argument that follows—either by the parents or by the child in anticipation of the parents’ threat. This escalation pattern severely disrupts the stability of the family system.

So it’s important that the boundary around who is in and who is out of the family system remains well-defined so that the young adult child feels secure about his or her place in the world long enough to figure out his or her next steps into adulthood. However, it is also important that the family boundary not be so rigid that it inhibits the child’s necessary practicing of adult-like behaviors in safe and appropriate ways. Families who refuse to allow their 18-year-old to make an increasing number of choices and reach increasing levels of independence can inhibit the development of responsibility, self-sufficiency, and life skills that the young adult child will soon need. Therefore, ongoing adjustments to certain family rules, such as curfews, jobs/bills, and friend/partner choices, are essential.

Use negotiation skills to co-create a new set of roles and rules that meet the needs of all family members.

How, then, can parents approach these transitions? One way to help your child learn how to be an adult is to treat him or her like one—at first emotionally, and later more practically. Speaking respectfully to your child, accepting his or her opinions as valid, and encouraging him or her to do the same to you are ways to introduce your child to adult-like, egalitarian relating. Negotiating new rules, privileges, and responsibilities together—“family meetings” are helpful for this—allows both the parents and the child to mutually create adjustments to the rules that are thoughtful, sensible, and predictable. Many families find it helpful to write down the new rules and display them in the home so that all parties remember them (and remember that they agreed to them!).

If any family member feels that the current rules and expectations are not working, they can call a new family meeting at any time to review and possibly revise them. If parents and child reach an impasse, try to be as creative as possible to find ways to meet the needs of all family members. Young adults may be happy to agree to increasing levels of responsibility in the home in exchange for increasing levels of trust and privilege. The family members should keep in mind that flexibility, communication, and negotiation with a goal of mutual agreement will take them smoothly through this period of transition.

It can be helpful for these discussions to begin well before the 18th birthday, so that there is plenty of time for the family members to think ahead, anticipate, and become mentally ready for the changes to the power balance and expectations that will likely occur. A discussion that occurs over the course of weeks or months is more likely to involve all family members, cover more contingencies and “what-ifs,” and result in a smoother transition through the actual birthday.

However, it is never too late. If you find yourself with a child who is already 18, or even 19 or 20, and are experiencing a difficult family adjustment into your child’s young adulthood, it is still advisable to approach your child and create an open dialogue about the rules and roles in the family.