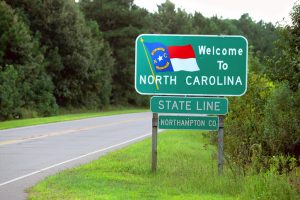 Editor’s note: Names and identifying information have been changed to protect confidentiality.

Just four years earlier, I could have been arrested for it.

In fact, only a few weeks before, I was scrolling through my memories from the “On This Day” function of Facebook and came upon my angry rants from May 2012. Despite the work we had all done to get out the vote, Amendment 1 passed in North Carolina, making it unconstitutional for the state to recognize or perform same-sex marriages or civil unions.

Well, what a difference four years and a federal court overturn make. If only I could have somehow sent a message back through time to that disappointed version of me. I would assure her that all would turn out just fine and inform her that in June 2016, my career as a therapist and relationship coach would be taking a slight left-hand turn as I would be officiating a wedding for the first time—at the marriage of two beautiful and courageous women. I would tell her that the only thing more powerful than the disillusionment she experienced back then would be the profound sense of esteem I was now feeling, standing under the wedding arch, watching Diedre and Andre pouring sand from each of their cups into the unity chalice.

An LGBTQIA+ ally, I’ve welcomed all who walked through my practice door since the day I opened it in 1999. Living in Hickory—a traditional Southern town located in the absolute buckle of the Bible Belt—I am one of a very small number of professionals who overtly advertise that we serve this population. During their first session of premarital relationship coaching, Diedre and Andre expressed great relief at having found someone locally who would be willing to marry them. My response seemed to put them at ease.

Her humor an obvious cover for years of hurt, Diedre said without hesitation, “Well, Liza, you are obviously not from around here.”

She was right. Sometimes where I come from feels like a world away. In hindsight I can truly appreciate that the suburban town of Montclair, New Jersey, was one of the most socially tolerant communities I’ve ever known. As an example, in the post-segregation era of the 1970s, after so many towns across the country had proven out the failures of bussing minority students into white neighborhoods, Montclair staged one of the most successful social and educational experiments of its time: it sunk most of its education budget into renovating the schools in low-income communities, turning them into magnet programs, and then bussed the white kids in!

My parents were among a group of actors who migrated across the river from Manhattan and cofounded a highly successful regional theater company—a brilliant strategy for actors to keep themselves more regularly employed. Needless to say, being raised around the theater provided a colorful and diverse upbringing surrounded by people from all walks of life and all manner of sexual orientation. If there had been a tagline for my childhood, it would be something like, “People are people.”

I was in for a rude awakening when I left my small town for college in upstate New York and discovered that most of the outside world was not like Montclair. That was when my personal tagline changed to, “Why can’t we all just get along?” and I had my first inkling to become a therapist.

I moved down to North Carolina after college in 2003, attracted by the abundant jobs and sunshine. Prior to settling below the Mason-Dixon line, I’d only ever heard the term “Yankee” at baseball games. Occasionally being referred to as one didn’t bother me at first, until it was accompanied with the directive to “go back home.” Perhaps in direct rebellion, my husband and I settled into our new Southern life by marrying in 2006, and a few years later I earned my master’s degree in marriage and family therapy at Appalachian State University. Soon after opening my practice, I was informed by a playful local of the difference between a Yankee and a Damn Yankee: the latter are the ones who stay.

And stay we did. In fact, we slowly began to fall in love with our sunny home and the people surrounding it. Our roots began spreading, and two children came along in proper stair-step fashion. And nothing forces a couple into their community like having children. We eventually joined the YMCA and even a nice Presbyterian church. One afternoon, in the middle of facilitating a marital retreat, I heard myself address participants as “y’all” and it occurred to me that I had lived in North Carolina longer than anywhere else in my life. These are “my people,” I thought. I’m from North Carolina now.

I never imagined that my first adventure into this realm would have me bringing two women together in a lawfully wedded union in my adopted home state. I choked back the tears as I looked out at Deidre’s and Andre’s loving family and friends and pronounced them legally married, that disappointment from four years earlier having been healed and transformed in one singular moment.

The people I’ve worked with in the therapy room have gifted me with a particular view into Southern culture that may not have been possible for me any other way. The collective ties that unite these fiercely loyal souls have utterly moved me. Everyone knows everyone else’s grandmother and genuinely cares about how they are doing when they ask. Crockpots are practically an extension of the church collection plate. When I was laid up in bed after bilateral hip surgeries, some of the people I helped flatly ignored my best efforts at enforcing the “no dual relationships” principle. One woman rang my doorbell and drove off, leaving a steaming casserole dish with a beautiful note that read, “If you can’t allow us to be there for you the way you have been here for us, Liza, you aren’t allowed to say you live in the South.”

Becoming a lay minister grew out of a visit with a childhood friend who lives even farther south than I, in Atlanta, Georgia. She explained that she and her fiancé wanted to get married, but as agnostics, they could not find anyone they felt comfortable with to facilitate the wedding. “Hell,” I responded, “I’ll do it!” And after surprisingly minimal effort, I became ordained with the American Marriage Ministries. My friends are still engaged, but as of this writing, they still haven’t gotten married. Meanwhile, word has started to get around my small town that I have become a minister.

The concept of performing wedding rituals does fit quite perfectly within the stand I already take for marriage, through helping transform marriages. Just two months prior to receiving my ministerial certificate, I was invited to present a TEDx Talk on my model for reinventing relationships. It seemed a natural progression to design a menu of coaching services specifically aimed at premarital couples, with the option of officiating the wedding itself.

But with all of that in mind, I never imagined that my first adventure into this realm would have me bringing two women together in a lawfully wedded union in my adopted home state. I choked back the tears as I looked out at Deidre’s and Andre’s loving family and friends and pronounced them legally married, that disappointment from four years earlier having been healed and transformed in one singular moment.

Once, a few years back, my sister—a self-proclaimed blueblood Yankee living just outside of Boston, Massachusetts—visited me in my new home. As we drove past a Confederate flag in someone’s front lawn, she turned an appalled glare my way. “Liza,” she asked, “how can you live around that every day?”

My answer came without even having to think about it. “Where else would I live but around this? It’s where I can make the most difference. I love these people.”

Love is love, after all.