You Never Told Me! Listening Well in Family Life 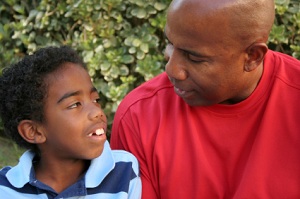 How many times have you heard something like this in your household?

“You remember. I told you about it last week. You said you were fine with it.”

“What? No you didn’t. This is the first I’ve heard about it!”

Whether it’s a teenager talking about a social event, or a spouse talking about a business trip, family life is full of conversations that only the speaker seems to remember! Misconnections, hurt feelings, and chronic frustration can surface in relationships where this happens frequently. Why does this important communication gap happen, and what can be done about it?

As someone who listens for a living, I have been amazed at how often my skills in the office disappear when I am in my own home. My husband begins to tell me something about his workday, exactly the kind of sharing talk I encourage in marriages and families every day, and my mind drifts off topic onto something I’ve been thinking about. If I have the laptop open, I may find my eyes moving from him to the screen without thinking. If I’m cooking, or listening to the television, and one of my teenagers begins to tell me about their day at school, my best efforts to listen are often stymied by the details of the pasta or the noise of the commercial. I’m astonished at how automatic this half-listening is in family life, and how hard it can be for family members to truly, patiently hear what a loved one is saying.

After thinking about this on and off for years, I believe that listening in family life is hard for several reasons:

1. Familiarity with the other’s voice. I believe that listening to the rhythm, tone and sound of another person’s voice for years and years makes our brains a bit dull to creating the attention we need to listen well.

2. Repetitive topics. There’s nothing like something new or different to catch our attention. But most of daily life in our home is a combination of familiar details, people, issues, and problems we deal with day-to-day.

3. Emotional dissonance. Home is the place most of us feel most free to be our full selves, and that includes our negative emotions, traits, and attitudes. If we are annoyed with what our family member is saying, doing, or feeling, we may just tune it out avoid conflict in ourselves.

4. Using communication as punishment. Many of us learn to express anger, hurt, resentment, and other dark emotions by refusing to communicate. We stop talking and/or listening as a form of punishment, and use that behavior in an effort to receive an apology or other expression of remorse from a loved one.

So, with all that going for us, how do we listen to each other at all!? It isn’t easy, and the family that regularly listens well has learned to manage all these roadblocks and more. What habits of mind can we all learn to strengthen if listening is a challenge to our family relationships?

1. Talk about important things face to face.  When we look at someone while he or she is speaking, we can pick up all kinds of other information besides the words used. We might notice the person’s facial expressions, body language, and feelings in the silence between sentences. All this visual information helps us not only hear the full message, but remember it, too.

2. Learn to interrupt the daily distractions and focus.  I have to make myself shut my laptop regularly when a family member begins talking to me. It has become a signal to myself to look up, focus, and listen to what is being said. The same can be done when muting the television, putting down the cell phone or magazine, or turning off the car radio. Give the speaker your full attention.

3. Make it a habit to ask questions. Nothing increases understanding when we are listening to another person than asking relevant questions. By asking for more information, you will add details, extend the conversation, and drastically increase your mutual memory of the discussion.

4. Listen for emotion as well as information. Most of our conversations aren’t just about problem solving, arranging schedules, or passing information back and forth. We talk to share ourselves, and those selves are expressed in the language of feelings as well as thoughts. When we connect with each other at an emotional level, we really share ourselves.

While new couples, marriages, and families may begin with intense listening and sharing, we can become complacent and distracted by our busy lives as the years go by. Listening is one of the most basic human skills we have and among the hardest to do well. Do your best to develop good listening skills as a family member, and you’ll feel your marital and family satisfaction strengthen and grow.

© Copyright 2011 by Lynne Silva-Breen. All Rights Reserved. Permission to publish granted to GoodTherapy.org.