Into the Woods: My Comeback from Alcoholism and Depression

August 20, 2013 • By Share Your Story contribution by Tony Regan 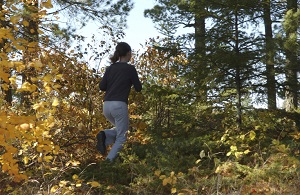 The evil of one man’s intentions live on through the physiological wiring in his children. The moment a child can’t live as a child due to extreme stress and tension is when the rules of the game change for the worse. A child living in a hostile environment isn’t free to think and act as a child; instead, he is forced to be constantly alert, on edge, and serious all the time. “No playing” means you have to grow up quickly.

The hatred I felt for this monster called my father never truly went away. There was no physical abuse, but the emotional toll that he created lives on. For 18 years, life was confusing.  For me, those were 18 years of depression, anxiety, and a damaged sense of self. I became highly introverted, as the shame of having a father who hated his family was more than I could carry. Seeing other children at school with loving fathers crushed me, as I longed for that as well. Coming home from school to see him drunk on the couch was wounding to me as a boy. It’s a sadness that can’t be conveyed in words.

Days in the woods became my only escape—it didn’t matter if it was 20 degrees or 100. I found peace in nature, away from the environment of stress. I spent many, many days in the woods, just me and our family dog. The quiet and peace was a welcome solace; a small babbling brook or wind brisling through the pine trees was my therapy. I was safe out there; I’d rather face a snake or coyote out there than come home and confront a tyrant. I can recount numerous times of running into the woods as I saw him coming home, not knowing what explosion may come my way (or my mom’s) without warning.

At 10 years old, I tried the poison known as alcohol. My dad had taught me how to pour beer from a keg without it foaming (I was tasked with getting his beer often), and I was curious about how this stuff would make me feel. “Like father, like son,” so the saying goes. It rang true for me as well. My initial curiosity became a 25-year battle with alcohol. By 15, I had found a new friend that would help me cope in social situations. Being “the awkward guy” was torture on me; the high school years were pure hell. I tried my best to adapt to being what I thought was a normal teen. Around my peers, I couldn’t function without booze. I tried to be “normal.” I failed.

From my teens to my early 20s, I pondered suicide often. I was alone and isolated in my room most nights, and a ritual of self-harm and drinking became my world. After many failed relationships with girlfriends, a DUI, and many lost jobs, I felt life was pointless. Every day was a challenge just to exist; I would open my eyes first thing in the morning and just exhale with the disappointment of being alive another day. This darkness would follow me for many more years.

The biggest thing that helped me manage or stop suicidal thoughts was an attitude shift. By focusing my thoughts on my family that I’d leave behind and how they would deal with the loss was a huge deterrent to even think of killing myself. I also used a few techniques that helped me to manage the depression that would trigger the suicidal thoughts. I learned to watch for a change in emotions, breathing, rapid thoughts, increased negativity/sadness, etc. Ultimately, it came down to my emotions and thoughts, and learning to control them before they controlled me.

Am I cured now? No. Do I still have suicidal thoughts? No, but I still battle with the anxiety and depression that was set in motion all those years ago. Some days are good, and some are bad. Like a warrior, I press on.

Tony Regan keeps a blog at tonysreviews.com, where he hopes to help others who need it.