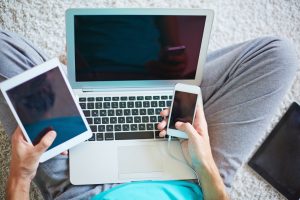 New research suggests internet addiction might be an early warning sign for additional mental health conditions. Participants in the study who demonstrated an addiction to the internet had higher rates of both depression and anxiety.

A University of Hong Kong study in 2014 estimated as many as 420 million people worldwide experience some level of internet addiction, amounting to about 8% of the approximately 5.2 billion people who are able to access the internet.

Researchers from McMaster University in Ontario compared internet usage among 254 freshmen students. They used the 1998 Internet Addiction Test along with new models that reflected recent changes in technology. This helped incorporate data from online activities such as video streaming, instant messaging, and social media more accurately.

Of the 254 students examined, 33 (13%) met the criteria set for an online addiction, with nearly half the remaining 221 identified as having problematic use rates.

Those whose usage rose to the level of addiction were shown to have difficulties in areas such as attentiveness, time management, impulse control, and stress levels, especially when using social networking sites or streaming video. They also displayed significantly higher rates of depression and anxiety symptoms.

Internet Addiction Research May Be Lacking