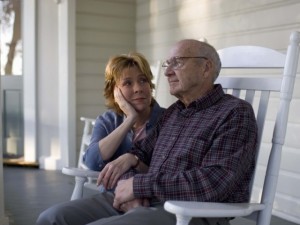 The degree to which we have separated/individuated from our parents has consequences when parents become elderly and /or ailing and no longer feel like the all knowing and all powerful people that we experienced in our earlier relationships with them.

Typically, we look to parents for support and love. When we are children, parents are the source of our values and ideas of how to be in the world. In the process of normal development, we separate and individuate. While most of us integrate some of our parent’s “voice”, we also replace some of our parent’s ways with our own. In contrast, for those who have not individuated and separated from their parents, parents remain the primary source of strict guidelines for how to be in the world.

When a parent becomes infirm and feels less powerful to us, we may get anxious that the steady rock, the guide star of our lives, the source of appreciation, recognition and definition, has lost some of his/her powers. If a parent starts to seem dependent or unsure and weak, we may feel lost and frightened. To defend against our fear, we hold more firmly to the beliefs, ideas, and values that the parent has instilled.  This can honor the parent and allay anxiety. We may feel that we are keeping our parent alive and vital if we keep their ideals alive in the way we continue to live our lives.

Sometimes, the awareness of the diminished power of a parent, perhaps the parent’s confusion, dependence or even helplessness, can create internal conflict. Grown children may start having thoughts that many of their life choices were made because the relationship with the parent left little room for their own individual, separate views of how they wished to live their lives. In the past, they had cooperated with the parent’s control of their life, but now they might feel anxious, disloyal, and/or excited, about the prospect of making new choices for themselves. Unlike the grown child who has to struggle to keep seeing the diminished elderly parent as powerful so they can carry on the parent’s blueprint for living, the conflicted grown child may struggle to be a loyal child but wants to develop their own road map for life.

It is useful to be aware of the possibility that as parents age, the degree to which we continue to lead our lives being influenced by them may be affected. We may find ourselves clinging more firmly than ever to our parents’ ways of thinking and being. On the other end of the continuum, we may feel freer to venture into new territory and risk behaving or thinking in ways that our parents might not fully approve of. Below are two examples of patients that I have worked with in therapy who represent these different ways of responding to their aging parents’ diminished abilities.

Len came to therapy when his father had a stroke. Len’s father had always been a powerful man. Now, he was unable to speak clearly and had trouble walking and getting around on his own. He ruled the family with kindness, but with clear rules for behavior. For example, Len told me that his father had forbade his sister to marry a man that she loved because he didn’t feel he would provide for her in the style the father thought she deserved. Even though she loved this man, she did not go through with the engagement. In another example, Len described how his father exerted a lot of control over who Len’s friends were. Len had been friendly with some of the neighborhood kids, but his father sent him to private school and wouldn’t allow Len to play with the neighbors. Len told me that although this seemed harsh at first, he eventually concluded that his father was right: His sister went on to marry a wealthy man, and Len made important friendships at his private school that got him connected to people who helped him become a successful financier. It was clear to Len that his father’s way of thinking was a model for having a good life.

Len was anxious and depressed when he came to see me. As we talked, I understood that Len did not come to therapy to change anything about the way he lived his life. He thought of himself as a loyal son and felt great comfort in feeling he could carry on his father’s ways. He had internalized his father’s “voice”, and he wanted to be able to be the same kind of father to his children that his father had been to him.  Len‘s experience of himself as someone who could make good choices was based on those choices being approved of by his father. To continue to feel good about himself, Len needed to feel he was following in his father’s footsteps. He was in therapy because his father’s dependence and loss of power was very disturbing. Len felt lost and without guidance. He needed to be helped to feel like he could carry on in the face of his father’s powerlessness. For him, therapy was a means to help him to mourn the loss of his father’s power. But the mourning process was not only about having his feelings and accepting his father’s circumstances; for Len, to mourn also meant he would have to feel and accept that he had what it takes to carry on and be the man he knew his father wanted him to be.

Carl also came to therapy when his father had a stroke. Carl’s father was very depressed and he too had lost his ability to speak clearly. Like Len’s father, Carl’s father was the most powerful person in the family.  Carl, his mother and brother always looked to the father to provide the map for how to live their lives. Carl recalled how he hated team sports when he was a kid but his father insisted he go out for the baseball team in High School. Even though Carl didn’t want to, he gave in to his father’s pressure and played for the team. He wanted to be in the Drama Club, but his father said that was a waste of time and he needed to study more. Carl complied.

When he came to therapy, Carl told me that he recognized that even though he had conflict with his father growing up, he generally went along. Eventually, he stopped thinking about what he wanted and just followed his father’s ideas. Now that his father seemed so powerless, he found that he was getting anxious. He was having thoughts that he knew were in conflict with what his father wanted for him. He was scared that he would use this situation as an opportunity to rebel from his father, something he had never done growing up. With some shame, Carl acknowledged that this possibility was thrilling, but he felt like he was doing something terrible to his father by even entertaining such thoughts.

As Carl and I talked in therapy, it became clear that Carl wanted to find a way to get more comfortable with his separate and individual thoughts and feelings. But he was anxious about how this would impact his relationship with his father. He wanted to know if it was possible to love and honor his father but live a life that felt more like his own. How would he ever be able to let his father know what he really wanted for himself?  He wanted to find a way to resolve the conflict between honoring his own “voice” and honoring his father. I believed that as we continued to talk in therapy, Carl would be able to become more individuated from his father. I also believed that Carl could become comfortable with his own and his father’s feelings about new life choices.

When a grown child has not individuated and developed their own separate unique self, the experience of coping with aging and ailing parents presents particular problems. The grown child can be left floundering when there has been too much reliance on the parent for direction and approval. Not having developed a separate individuated self, the child finds it difficult to believe in their own ability to go it alone. In such situations, the child may need to find ways to continue to believe in the power of the internalized parent. In  contrast, for grown children who experience the parent’s lessened power as an opportunity to break free and develop a self, there is often a process with a good deal of conflict about choosing oneself over one’s parent. Particularly at a time when the parent is seen as old, ill or failing, it is difficult not to feel that one is adding to the parent’s powerlessness. Under these circumstances, how to feel loyal to the parent and learn to be true to oneself is the major conflict to be addressed.

Whether one wants to maintain the experience of the parent as the powerful holder of life’s rules or free oneself to develop one’s own rules, the degree one has Individuated plays a critical role for the grown child.