How to Stop a Fight with Your Partner Before It Starts 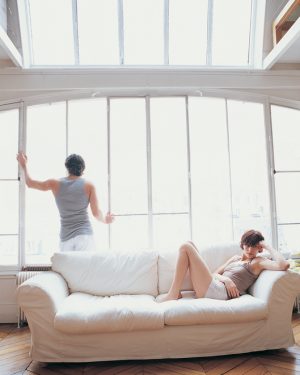 Is your relationship or marriage being destroyed by constant bickering and fighting? If you want your partnership to survive, you’re probably going to have to learn how to discuss the problems between you—without things becoming a scream-fest.

Here’s how to pull it off:

1. Notice When and How You’re Getting Angry

Once you’ve blown your top, it’s too late to start in with the anger management techniques. You’re already past the point of no return and in that zone where you’re doing things you know are irrational and unlikely to help the situation, such as calling him names, telling her she’s just like her mother, and dredging up past mistakes—you know what I’m talking about.

In order to avoid a full-blown argument, you’ve got to catch it before it starts. Start paying attention to your personal anger gauge. What happens to you when you get mad? Do you feel hot? Clench your fists? Grit your teeth? Feel tightness in your chest? Once you are aware of what your body does when you get upset, you can start recognizing the signals that an explosion is coming.

When you notice your emotional temperature rising, you still have time to modify your trajectory. Take a few deep breaths to interrupt your body’s ramping up to fight-or-flight mode. Stop talking and ask yourself, “Is this going to lead where I want?” Bring your partner into the loop: “Wait—we’re headed toward a fight. Let’s recalibrate here.”

If your partner is heating up too, you may get an angry snap in response, but don’t give up: “I really want to solve this. We’re not going to do it by yelling at each other. Let’s both try.” If both of you can get on the same page of wanting to fix the problem and being willing to work at it, you have a much better chance of success.

3. Take a Time-Out, Then Come Back and Get to Work

While you’re out, do not think about the issue. Don’t come up with the next comeback, don’t try to figure out the solution. Just calm down.

If one or both of you is too worked up to bring the conversation back down to a workable level, you may have to take a “time-out.” Leave the room or even the premises if need be. However, let your partner know you are coming back. Running away from the problem does not make it better. Taking a break and then coming back to resolve it can. So give your partner a specific time you will be back or will resume talking about the issue—20 minutes is a good minimum, 48 hours a possible maximum. If you say 20 minutes but still aren’t ready by then, you must come back anyway and say you need more time. Giving your partner the sense you’re abandoning ship will not help.

Even better, lay out a plan for taking breaks in advance so when an argument begins to build and one of you needs to take a time-out, it doesn’t come as a surprise to the other.

While you’re out, do not think about the issue. Don’t come up with the next comeback, don’t try to figure out the solution. Just calm down. Think about baseball, puppies, or whatever does it for you. The goal is to calm down enough to go back to work on the issue.

This approach is not foolproof. It’s not a recipe for solving all problems. But it can be an effective strategy in times of relationship distress. If you find that you and/or your partner can’t seem to get a handle on your anger, or that even when you do you’re gridlocked on the issues in your relationship, it might be time to seek out a counselor for professional help.