How to Deal with a Workplace Bully 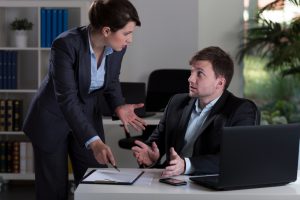 Unfortunately, working with a bully is not a rare experience. According to the Workplace Bullying Institute, 27% of survey respondents reported having experience with bullies at their places of employment. It’s particularly tragic that the majority of bullies, statistically, are bosses. I’ve had to deal with bullies either directly or on behalf of someone else in various jobs, and most of the other professionals I know have as well. Some of them are dealing with a bully right now.

The worst part about dealing with a bully is trying to decide whether it’s best to ignore the behavior, even though that means giving the bully tacit permission to keep on keeping on, or to stand up to the bully and possibly be seen as a troublemaker.

If you’re reading this, you may be dealing with a bully yourself or know someone who is. You might be wondering what to do about it. It’s important to take a look at what is really at stake here. Is this person trying to damage your reputation? Are they just really annoying or rude? Is this person the only bully at work or are you noticing a culture of bullying?

The worst types of bullies to have at work, especially if you really need the job you’re in and aren’t ready to move on, are the ones who can make you look less competent than you are. They might sabotage projects by hiding key pieces of information from you. If you ask to cut them out of your process, you might be seen as not being a “team player.” It’s amazing how some bullies can seem dim-witted about certain things, yet they are masters at making someone else’s life miserable when they commit to doing so.

Handling a Bully in the Workplace

As with most types of workplace behaviors—assuming they are not egregious, threatening, or dangerous—the first round of intervention should be sitting down privately with the bully in a nonconfrontational way and just pointing out the facts of whatever it is that is troubling you and how the other person factors in. This lets the other person know you are aware they are contributing to the issue, but invites them to help problem solve.

I know. You don’t want to problem solve with a bully. You shouldn’t have to. They’re annoying and mean. It’s worth trying to take the high road, though.

I know. You don’t want to problem solve with a bully. You shouldn’t have to. They’re annoying and mean. It’s worth trying to take the high road, though. At worst, you can document that you took initiative and made a good-faith attempt to improve the situation.

If that intervention fails, it’s time to get your supervisor and possibly human resources (HR) involved. You’ll want to have documentation of behaviors (including dates and details) and your attempts to address them.

The rules of thumb for handling general conflict apply when it comes to handling a workplace bully at any stage:

What to Expect When Taking On a Bully

Bullies exist in workplaces because few people attempt to take them on. If you choose to, be prepared for a potentially long and mostly thankless journey. Aside from improving your work environment, the upsides include finally getting validation that you aren’t “crazy” for believing this other person was being manipulative and passive-aggressive. The downsides include awkward meetings with people who may or may not be sympathetic, as well as being subject to the bully’s side of the story, which could call your motives into question.

Taking on a workplace bully takes courage, but if you are invested in making a difference in your workplace culture, it’s a worthy cause. Just be sure to maintain professionalism, document, document, and document some more, and be prepared for some pushback.