How the Negative News Cycle Can Impact Mental Health 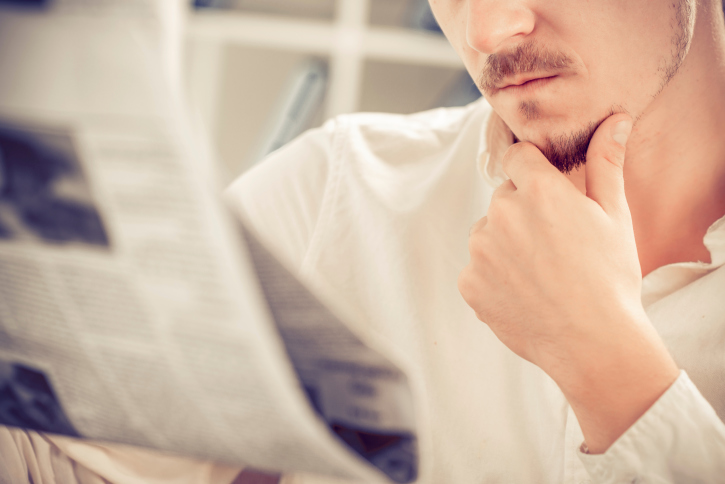 The expression, “If it bleeds, it leads,” has been used to characterize media coverage of lurid stories since the early days of newspapers, and today’s around-the-clock news cycle has made avoiding negative news nearly impossible.

The near-constant barrage of stories about disease outbreaks, war, and natural disasters are taking a toll on people who consume the news, said Dr. Mary McNaughton-Cassill, a psychologist who studies the connection between stress and the media.

“What I believe happens to most people is that it adds to a feeling of malaise—a feeling that the world is just not going well,” she said.

Psychologists have studied the connection between repeated exposure to negative news items and an increase in feelings of depression and anxiety among news consumers. Some people may experience compassion fatigue or secondary traumatic stress, becoming less sympathetic to the plight of others over time due to an overabundance of stories of violence and suffering in the media. Others may experience a reaction similar to those who have experienced trauma firsthand.

A 2013 study looked at the effect of continuous media coverage of the Boston Marathon bombings on a group of respondents from New York City, Boston, and the rest of the United States. A total of 4,675 adults took an Internet-based survey within a two to four-week period after the bombings on April 25, 2013; of that sample, about 10% were directly exposed to the bombing and 9% experienced the lockdown in Boston while police were looking for the suspects. Other respondents without direct exposure to the bombing reported six or more hours of daily media exposure to bombing coverage.

The results indicated those respondents viewing news coverage for six or more hours were nine times more likely to report high acute stress levels than those with minimal media time. Those who had direct exposure had continuous acute stress symptoms but were less likely to exhibit high acute stress, perhaps, as researchers suggest, because emergency responders were on the scene to provide support. Researchers say repeated exposure to traumatic imagery through the media can activate fear circuitry in the brain and cause flashbacks—two precursors to developing posttraumatic stress (PTSD).

E. Alison Holman, PhD, lead author of the study, recognizes the results are correlational and the relationship between media and trauma is complicated.

“There are so many factors one needs to consider—prior life history (trauma, stress, health, social, family circumstances), ongoing post-Boston Marathon Bombing stressors, coping skills, and emotion regulation skills,” Holman said. “It is possible that this could happen, although I would caution that many people have acute stress symptoms that dissipate over time. We are currently looking into the question of quantity (hours) versus content (images, sounds) that might predispose someone to developing lasting posttraumatic stress and other mental health issues. At this point, all I can say is that it seems that both really matter.”

The ways in which people cope with grim subject matter in the media can be categorized in three ways, McNaughton-Cassill said. The first group—hypervigilant and prone to anxiety—are the most self-selecting of what news they view and will generally tune into a message they agree with.

“If they’re not plugged in, they feel they’re missing something,” she said.

“If your work requires that you engage with frequent media stories—especially if they are of graphic violence—build stress-relieving activities into your routine so that you can counteract the negative effects.” —E. Alison Holman, PhD

The second group may tune out entirely and be unaware of what is going on the world, McNaughton-Cassill said, while the third group—the middle-ground category that most people fall into—is viewing news in a random manner and not consciously thinking about media exposure.

McNaughton-Cassill admits neither extreme is ideal but suggests people should be willing to set limits in terms of how often they check news and what items they choose to pay attention to.

Those who work in journalism may need to take extra precautions to neutralize potentially negative outcomes. Holman cautions people to avoid watching a 24-hour news cycle filled with negative news, as it is often sensationalized for shock value.

“There are studies showing that reporters who are frequently exposed to images of graphic violence report experiencing more mental health-related symptoms, and women may be more vulnerable to having a stronger physiologic stress response than men after subsequent stress when primed with reading negative news articles versus neutral news articles,” Holman said. “If your work requires that you engage with frequent media stories—especially if they are of graphic violence—build stress-relieving activities into your routine so that you can counteract the negative effects.”

Because media outlets are now under immense pressure to produce a continuous stream of news content, it is becoming increasingly difficult to filter out what information represents a legitimate threat and what is more benign.

“The way our memory works, we’re wired to pay attention to negative, scary things,” McNaughton-Cassill said. “The truth is, on objective measures, we’re much better than in the past.”

McNaughton-Cassill sees a silver lining to negative news if it propels people to action and toward contributing a solution to the problem. She suggests a solutions-based approach to counteract the negative aspects of news.

“I think the tagline that is missing in the media is ‘What can we do?’ What is the solution?” she said. “They need to show more people who are trying to solve problems.”