How Smartphones Affect Today’s Children, and Other News 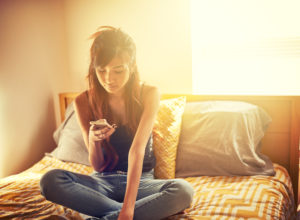 Smartphones are having a significant effect on adolescent mental health trends, according to a piece published this week in The Atlantic. According to Jean M. Twenge, who researches generational differences, smartphones are crippling the ability of young people to relate. Rather than go out with friends, they are more likely to stay at home and talk via their phones.

The shift has had both positive and negative results and has affected many aspects of teen life, such as dating. Fewer teens than in generations past are dating, and more are waiting to have sex.

The result of this shift, Twenge says, is a generation that is physically safer—with a greater propensity to stay home rather than go out—but more psychologically vulnerable. Mental health issues are increasingly common among young people, whose rates of depression and anxiety continue to rise. Time spent on social media and away from in-person interactions may play a role.

Not everyone agrees. In a JSTOR Daily piece, Alexandra Samuel suggests parents, not kids, are the ones addicted to smartphones. She argues that there has only been a modest dip in happiness levels among teens, and that this dip is consistent with previous fluctuations. Samuel claims high school students who consume large amounts of social media are no more depressed than their peers, but parents are a different story.

Caregiving is Hard Enough. Isolation Can Make it Unbearable.

People caring for loved ones with Alzheimer’s and other progressive and chronic illnesses often struggle with isolation. Some are unable to leave their loved ones, so they must choose between taking the care recipient with them or forgoing social contact. Taking a care recipient along poses its own difficulties. In some cases, caregivers hear that their loved one makes others uncomfortable and is therefore unwelcome. This can compound the already immense challenges of caring for an ailing family member or friend.

Sexual assault significantly increases the risk of experiencing a mental health condition, according to an analysis that looked at nearly 200 independent studies of more than 230,000 people. About 1 in 4 participants (24%) across studies had experienced a sexual assault.

Previous research has found a decrease in brain pH associated with mental health conditions such as schizophrenia and bipolar. New research suggests this could be a key feature of a specific condition, not just a result of factors related to the condition.

An opioid abuse epidemic has led to a surge in opioid-related deaths. Most research suggests overuse of prescription opioids is a major factor in this epidemic. Yet, 1 in 12 doctors—and 1 in 5 family physicians—receives payment from pharmaceutical companies related to opioids. This could bias physicians in favor of opioids, potentially affecting prescription-related decisions and exacerbating the epidemic.

According to a survey of 15,000 workers, men are more likely than women to experience work-related mental health issues. They are also less likely than women to seek help. A third of men attributed stress to their jobs, with just 14% blaming stress on outside factors. Women equally blamed work and other factors for their stress.

Certain medications, including antipsychotics, some anti-anxiety medications, H-2 blockers, and anticholinergics, can exacerbate symptoms of dementia and other cognitive issues. These drugs can also increase the risk of falls and may contribute to a premature death. Yet, 44% of people with dementia who are admitted to nursing homes are prescribed one of these potentially inappropriate medications.