How Food Affects Mental Health Differently As We Age 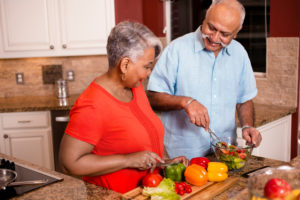 Diet affects mental health, but the effects of specific foods change as people age, according to a study published in Nutritional Neuroscience.

Research has shown that the brain continues developing until about age 30. The study’s authors suggest the effects of foods change as the brain matures. Foods that support mental health in young adults might not be as healthy for older adults.

Meat did not seem to improve well-being in adults over 30. Fruits and vegetables had more effect on their emotional well-being. Mature adults who avoided coffee and foods with high glycemic index reported better moods, as did those who ate breakfast.

Fruits and vegetables act as antioxidants that reduce inflammation and oxidative stress. Oxidative stress tends to increase with age. This may be why antioxidant-rich foods seem to improve the moods of mature adults. Meanwhile, coffee and sugary foods activate one’s sympathetic nervous system. This could explain why mature adults reported better moods when they avoided those foods.

Researchers are increasingly interested in the connection between diet and mental health. A growing volume of research has looked at the connection between gut health and psychological well-being. Research published in 2016 linked the absence of a specific gut microbe to autism-like symptoms in mice. A number of studies have found that probiotics, which increase beneficial bacteria in the gut, may fight depression and negative thinking.