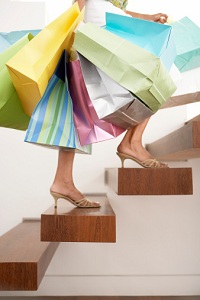 The idea of compulsive shopping being a “real” disorder is becoming more palatable recently. People are looking at their economic situations and trying to understand the dynamics behind credit card debt and overspending. At the same time, people are “coming out” as compulsive shoppers, like Avis Cardella, author of the book Spent, which depicts her life-long addiction to shopping and spending. As compulsive spending is taken more seriously, understanding its soothing purposes will be an important aspect of aiding those who struggle with so-called “retail therapy.”

Compulsive spending is a “hunger disease.” Understanding and knowing what the appetite is like for those trying to feed a hunger disease can lead to adequate and sufficient satiation, so to speak. Most people sustain a nagging hunger pang somewhere deep inside—the depth, severity, and frequency of the hunger pangs surface depending on personal history, struggles, and dynamics. For some, compulsive shopping is the right food for the hunger. The therapeutic aspect of compulsive spending wears differently for each person.

“What I Have in My Closet Means I Matter”
Emmy, a 32-year-old professional woman, attends regular therapy to address issues that interfere with her interpersonal relationships. Emmy has longstanding friendships, but, deep inside, she feels overwhelming hate for people in her life that have what she feels she deserves. This could be anything. She feels hate, envy, and an overwhelming amount of entitlement for these “things” that others have but Emmy does not. Emmy is quite open about her shopping rituals, where she will buy several of the same items, for instance, Joe’s Jeans, and hoard them. Rarely does she wear them: Emmy knows that she has them, and that is what matters. In her mind, having these items makes her something more than someone else. For Emmy, this is essential to being able to feel stable and alright in her fragile and vulnerable inner world.

Managing Anxiety through Online Shopping
Virginia, a 42-year-old married and self-employed woman, has been suffering anxiety attacks since her mother died two months ago. She had been in therapy for the past 8 years to address her personal growth and professional development, as well as to deepen her marital relationship. Virginia had overcome earlier bouts of overshopping by paying off her debt, stopping the use of credit cards, developing a budget, and making more money. She has been stable for over five years.

In the past few months she reports going online and shopping to minimize the intensity of her panic attacks. Although she has been able to attend regular therapy and other grief-related support groups, she still found her anxiety to be debilitating and terrifying. When she started shopping more consistently again, she became aware of the calming and soothing effect shopping provided for her. Virginia says that since she is not buying high-priced items or using her credit card to cover her purchases she is not out of control, but rather more aware of her tendencies to shop more frequently to quell her anxiousness.

The Soothing Nature of Nordstrom
Samantha, a 38-year-old mother of a two-year-old girl, is married and recently settled in the United States from France. She is educated, capable, and responsible. Samantha’s mother died when Samantha was a child, and because of the nature of her death Samantha has suffered complicated grief, loss, and trauma throughout most of her life. When Samantha entered therapy to address her compulsive shopping, she had no idea it was related to her trauma and loss.

She reports ongoing thoughts and memories related to her mother’s death and her own childhood and upbringing that overwhelm her. She wishes not to have these types of thoughts and goes shopping to distract herself. She’ll start to think that parts of herself are not good enough, that she’s not well put together, and that shopping for new things will lead to an improvement. Once she finds herself shopping and ruminating over negative thoughts about herself, she is no longer thinking about her mother and the associated memories. Samantha uses shopping to stop painful and troubling thoughts and memories.

Each of these cases describe situations and experiences that have led a person to use compulsive shopping as a means to soothe. In the next blog I will discuss the therapeutic interventions in helping clients like Emmy, Virginia, and Samantha.