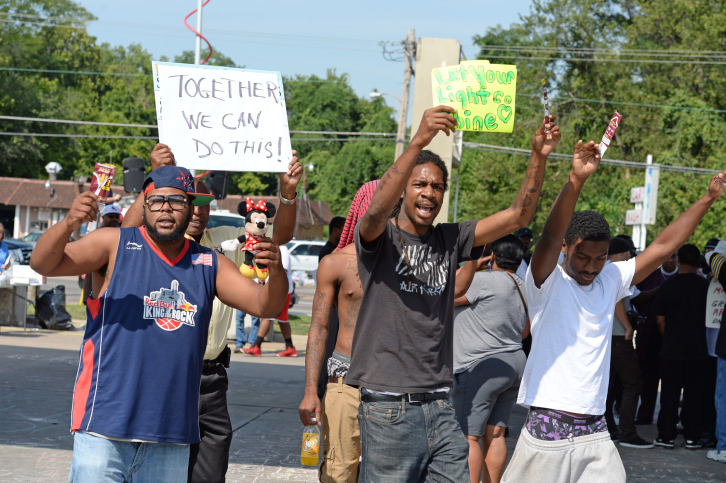 Ferguson, Missouri has turned into ground zero for protests of police behavior after the shooting of Michael Brown, an unarmed 18-year-old. Since the shooting, Ferguson residents have been subject to a regular stream of trauma. Fear and sadness over race relations and policing disparities, property destruction, protests that have turned violent, and near-constant police presence can be traumatic even to people who have had no direct involvement in the shooting or the subsequent protests.

Trauma can cause posttraumatic stress, chronic anxiety, depression, and a host of other symptoms and conditions. Mental health experts, though, are increasingly advocating for early mental health interventions in Ferguson. St. Louis Alderman Antonio French recently requested that Governor Jay Nixon send at least 400 mental health professionals to the area; Nixon responded by sending a group of counselors. A number of advocacy organizations, including the Association of Black Psychologists and the Community Healing Network, have also teamed up to provide mental health care to struggling locals.

After the tragic shooting deaths of 26 people at Sandy Hook elementary in Newtown, Connecticut, two years ago, the Department of Education awarded the school a grant to fund mental health care for the community. The funds are drying up, even though the after-effects of trauma live on. A local union of teachers is asking the American Federation of Teachers to lobby for more mental health funding for the school.

Children who experience mental health problems, a new study has found, are more vulnerable to unemployment later in life. The study evaluated nearly 20,000 children from the British Longitudinal Study of Young People, and found that children who reported higher levels of distress were 40% more likely to experience unemployment as young adults.

A new NPR show, Invisibilia, aims to explore the often-invisible world of human behavior and mental health. The show is slated to launch in 2015, and will explore a host of emotional issues, such as how fear distorts perceptions and why some people are happier than others.

Worry Less, Be Happier – Just By Going to Bed Earlier

According to a study that surveyed 100 young adults about sleep habits and worry, going to bed earlier might improve mental health. Researchers found that people who sleep for longer periods and who go to bed earlier report lower levels of stress and worry.

Women Caring for Elderly Relations Experience High Levels of Stress and Their Careers Can Be Seriously Affected, According to a New Study

Women often are tasked with caring for elderly and sick relatives, and a new study has found that this caregiving work takes its toll. Researchers interviewed women in academic and administrative jobs, finding that most women in the group devoted at least one day per week to caring for a sick loved one. Women reported stress and anxiety due to the caregiving. It can also sideline women’s careers. The study’s authors also note that many women are reluctant to use flexible work hours to care for loved ones, and that women may not know that they can use these hours for such purposes.

Could Laughing Gas Be Used to Treat Severe Depression?

According to a study of 20 people struggling with depression, a familiar dental tool, laughing gas, may help alleviate depression. Participants were randomly assigned to receive either laughing gas or a placebo. Two-thirds of participants reported a reduction in the severity of their depression symptoms after treatment. While the study only evaluated the short-term effects of laughing gas, researchers are hopeful that this treatment could one day provide rapid relief as depression sufferers wait for longer term treatments to work.