Help Others to Help Yourself at the Holidays 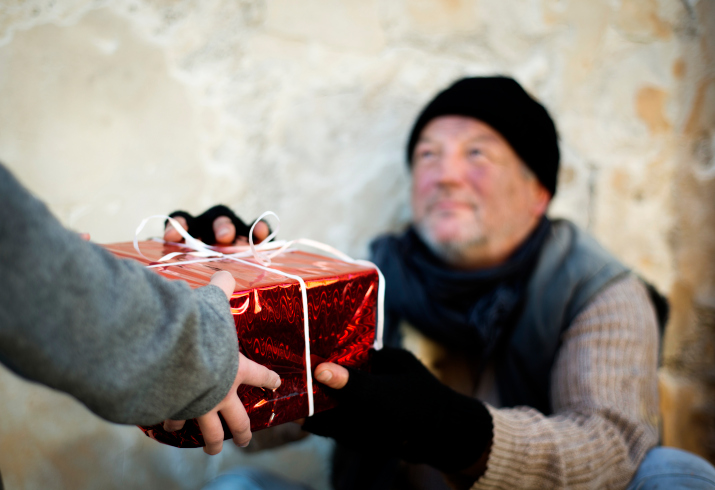 With the holidays comes more stress and worry for all of us. Stress can come in many different forms. This stress and worry can be centered on finances, time, or upcoming get-togethers. It can become a time of hustle and bustle and mass spending.

I watched a group of friends, right after our Thanksgiving meal, spread out the sale ads on the floor and began circling items and preparing their plan for their Black Friday shopping spree. They collaborated with each other about how each of them would go to different stores to purchase different things for each other. They also determined that they each needed a runner that could run around the store while they waited in line to get the “special deals”.

It was a frantic process, and it was exhausting just to watch them. Was this worth all the money that they saved? If I asked them they would say, “Absolutely! These are great deals.”

Some of us worry about finding the right gift for everyone on our list and scramble from store to store trying to achieve this objective. Others worry about whether their families and friends will like the baked goods they made this year because their budgets were too tight to buy presents. Stress can also arise when we are separated from our family and friends or when we are alone.

For many of us the holidays become a blur of tasks, errands, or chores to complete. This leaves us little time to just slow down and enjoy the season. Our priorities shift and we can fall prey to the advertisers and media promotions about toys, gifts, or gadgets that are now on the market.

Most of us don’t think about needing a warm place to live or scrambling to find something to eat. However, this can be a reality for many families this holiday season. Ever been alone on a holiday? What was that like? What if you could focus on someone else that may be in need? Would that change your stress level?

A week ago, I read an article in my local paper that was asking for donations for the upcoming holidays and the need that they estimated. In my town with a population of about 39,000 (comprised of many military and elderly individuals and with a median household income around $39,000), it was estimated that both the Salvation Army and a local church expected to serve 500-550 families this Thanksgiving.

Further, the report said that in 2012 this same Salvation Army provided over 40,000 meals. This year the Salvation Army in our town has partnered with our rescue mission to better serve our homeless population. It was anticipated that they alone would serve 300 meals. The local food bank stated they were giving out Thanksgiving baskets (with a full meal) to over 850 families. They expected to hand out around 800 Christmas baskets. Putting together and distributing this number of baskets takes many volunteer hours, they reported.

This article got me thinking about the need across America. In 2008, when the economic crisis hit, I began hearing more about hunger in the United States. I began seeing more organizations asking for help to feed kids in America.

In 2011, a government report (Coleman-Jensen) was published showing the increased number of individuals in the US suffering from hunger. According to a hunger relief charity, Feeding America, they are providing food annually to 37 million Americans, including 14 million children. In 2006, they reported feeding 25 million Americans, including 9 million children. That means one in eight Americans now relies on Feeding America for food and groceries (FeedingAmerica.org).

The season for me is about giving, not about buying or receiving the perfect gift, going into debt, or losing track of what is important—which can be easy to do with all the advertising and sales that companies employ to get you to spend money.

I challenge each of you reading this to find some time to give back to your community. That could be anything from a cash donation to your local food bank or homeless shelter to volunteering your time to serve meals or helping to put together baskets for families in need. What can you do this holiday season to help someone in need and relieve your stress?