Getting Beyond Blame: Connecting to Nature and Feelings 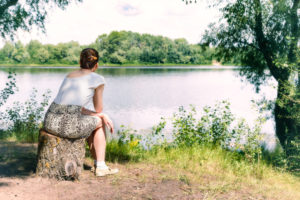 I spoke to a friend the other day who, like many others, has been hit hard by the economic downturn. In spite of health problems and the great difficulties he is undergoing, he so badly wanted to offer the work he does in the field of healing that he conducted a workshop and donated all of the proceeds to the institution that allowed him to use their facilities. So it surprised him when, upon turning in the donations and asking for some reimbursement for some copies he had to make for the workshop (a paltry amount), he was told about other users of the facilities who were able to give more, and about how much it had cost to keep the building he’d used up and running—even then, as his receipt was micro-analyzed and questioned. Although the workshop had gone wonderfully well, and he’d earned a sizable amount of money for the organization, he left feeling confused, inadequate, and ashamed.

He told me that at first he felt defensive, wanting to explain his own situation and to somehow get the administrator to understand his position. The bad feelings lingered for a long time before he realized that the person scrutinizing his receipt, although always speaking in a “nice” tone of voice, had, nicely, shamed him. Once he tuned into this shame, and was able to feel how much he had wanted to give, and how difficult it was for him to ask for reimbursement, he was able to feel his own pain, and extend compassion to himself. After this, he was then able to give the institution the benefit of the doubt. He was certain that as a non-profit the place was struggling, and that the person who had dealt the blow (although in a voice that had made it difficult for him to notice what was actually going on) was only trying to protect his own job and livelihood.

When I asked my friend how he managed to connect with his shameful feelings and extend compassion to them, he told me two things helped. First, he talked over the situation with a loving friend who understood him. Next, he took a walk in the nearby woods, which helped him soothe himself. While out in the woods, he reconnected with his original intention—how much he wanted to help and extend his healing practice to others. He realized how much we are all in distress, and he was able to sympathize with all of those undergoing financial distress, including the non-profit. He also saw more clearly how to set up such events in the future, and learned to take no one’s generosity for granted. He realized he had believed, since he’d extended more generosity than he could afford, that others would know this and extend generosity to him—but he hadn’t clearly stated this to anyone.

The difficult economy is creating a lot of contraction and tightness in many people; many of us feel especially vulnerable and fragile, and  it’s often difficult to tune into how we are tightening up and defending ourselves. I missed a ferry by a few seconds the other day, and realized how much I wanted to blame someone for not extending those few moments of generosity to me, as I was on foot and would not have delayed the boat by much more than 10 seconds. My anger flashed, and I mumbled some invective under my breath. And then, remembering my breath, I turned to look out at the nearby water and seabirds, tuned into the sensations in my body, and finally calmed and experienced compassion for myself. My tightness made me think I was entitled to the ferry ride. My rush had created a sense of disturbance and urgency. In fact, I had not originally expected to make that ferry, and it was only when it became close and possible that it became a problem. My contraction probably had to do with unexpected cancellations and some bad news I’d received earlier in the day.

I don’t want to gloss over the anyone’s difficulties, or say it’s a bad thing that I or my friend were contracted, felt defensive, or indulged in angry feelings. This is normal, and it will continue to happen for the rest of our lives. Sometimes we will find soothing in nature, and sometimes the feelings will have to run their course. What my friend discovered, however, was how his sense of shame fueled his defenses, and caused them to linger for awhile. It was so difficult for him to feel the pain underneath the shame, and the sense of inadequacy, that he bolstered his defenses. I, too, bolstered my defenses with the ferry ride. When I was able to let go of my story about how I needed to make the ferry, I was able to feel the pain of not getting the extra hour or so with my family I had so briefly hoped for. When my friend let go of his defenses he was able to go deeply into the pain of his illness and financial crisis. We were able to slow down, feel, and only then could the letting go happen. In both of our situations, connection with breath and nature helped us make that critical connection to ourselves.

We hear a lot of talk about having compassion for others. Until we can connect with our own breath and with something soothing, such as a tree, a garden, or some other part of the green world, and give ourselves the comfort and compassion we so urgently need right now, we won’t have any to give anyone else. Our ability to connect with our own pain depends on getting past our stories and defenses that are so often caused by a sense of shame or failure or loss. And contact with nature, I find, is one of the best ways to connect with my body and feelings underneath the blame stories.

© Copyright 2010 by By Laurel Vogel, M.A.. All Rights Reserved. Permission to publish granted to GoodTherapy.org.