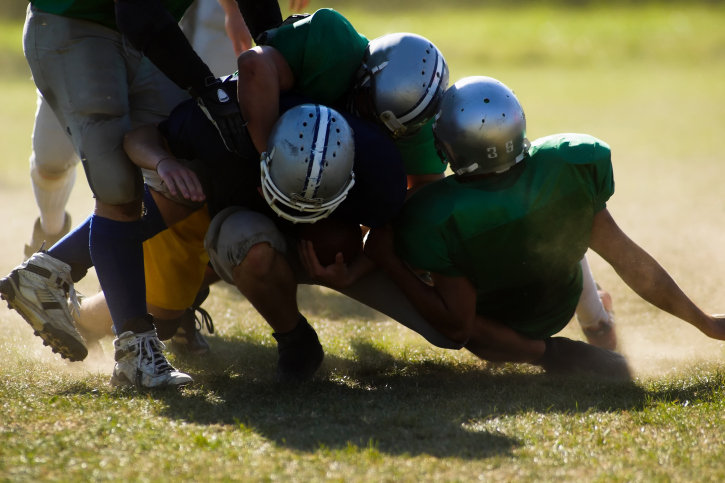 The brains of 87 of 91 deceased former National Football League (NFL) players tested positive for chronic traumatic encephalopathy (CTE), according to researchers with the Department of Veterans Affairs and Boston University.

CTE is a degenerative brain condition caused by repeated blows to the head. Originally identified in boxers in the 1920s, many doctors are expressing increasing concerns that the condition might also affect football players. CTE is linked to a host of brain issues, including Alzheimer’s and other forms of dementia.

The Brain Effects of Playing Football

The only way to test for CTE is to directly examine the brain—impossible while a person is alive. To test for the effects of repeated head trauma, researchers studied the brains of 91 former NFL players at the nation’s largest brain bank. Eighty-seven brains showed degeneration consistent with CTE.

Researchers looking at brains from the brain bank had previously found signs of CTE in 96% of NFL players as well as 79% of all football players. Of a total of 165 brains of former professional, semi-professional, college, or high school players, 131 showed signs of CTE.

Traumatic brain injuries can lead to CTE, but doctors have become increasingly concerned about repeated minor trauma. Forty percent of the brains that tested positive belonged to defensive and offensive linemen. These players come into regular contact with one another, suggesting this regular contact may cause the most damage.

Concussions in the NFL

The findings have added to concerns about whether the NFL is doing enough to protect its players. A group of players who filed a class action lawsuit against the NFL settled their suit in 2015. Under the settlement agreement, the NFL must give as much as $5 million in medical care to retired players who have serious medical conditions associated with repeated head trauma.

The NFL says it is working to reduce the rate of concussions and points out a 35% decrease in concussions during regular games between the 2012 and 2013 seasons. In the 2012 season, 173 players experienced concussions compared to 112 during the 2014 season.