For Richer or Poorer: Why Community Trumps Money in Marriage 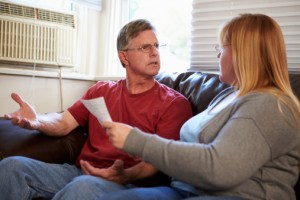 How important is money when it comes to sustaining a marriage?

Money is cited in the media as one of the most common topics of marital conflict (Chatzky, 2007), and financial stress has been identified as a contributing factor to divorce (Amato & Rogers, 1997). Research suggests that conversations regarding money tend to be emotional and difficult to resolve even when couples repeatedly attempt to address financial issues together (Papp, Cummings, & Goeke-Morey, 2009). When facing unemployment or credit card debt, should couples brace themselves for relationship challenges?

Financial issues in marriage are difficult to resolve because money is associated with personal perceptions of self-worth and vulnerability. As a result, couples are often triggered to defensiveness when discussing financial issues (Tichenor, 1999). Feeling insecure during financial discussions may contribute to what psychologists refer to as “emotional flooding”: an overwhelming experience of emotional pain that inhibits adaptive coping strategies, such as calm and rational dialogue.

When humans are emotionally flooded, blood flow becomes restricted in a part of the frontal lobe in the brain called the prefrontal cortex. Tasked with problem-solving and identifying potential consequences, the prefrontal cortex is an integral component to resolving relational conflicts. When the skills it allows for are suddenly unavailable during stressful conversations about money, couples may find themselves stuck.

Imagine this scenario: a husband learns that he didn’t receive a needed raise. Disappointed and feeling like a failure, he discloses the news to his wife, who begins to feel out of control and alone in carrying the burden of the family’s bills. Instantly, both individuals become emotionally flooded with hurt and fear. Can you imagine having a productive or positive conversation about finances under these circumstances?

Given that marital conflicts about money are often emotional and less easily resolved, could couples benefit from seeking external support from loved ones in their communities during seasons of financial stress? As I explored academic articles in response to this question, I stumbled upon two studies that changed the way I thought about money and marriage.

Given that marital conflicts about money are often emotional and less easily resolved, could couples benefit from seeking external support from loved ones in their communities during seasons of financial stress?

In David Lapp’s May 2014 article for The Institute of Family Studies, titled Marriage Is a Community Affair, Lapp reflects on his marriage research with impoverished Appalachian families. Lapp notes that, in his study, the older, economically disadvantaged farmers and miners in the community were more likely to maintain committed marriages, whereas the younger generations, though more financially secure, were less likely to pursue marriage or stay married.

Lapp suggests that, though financially stressed, the older Appalachian couples benefited from a strong social support network that sustained their unions. “A marriage is held together not only by the two spouses, but by the web of relationships that surrounds them,” Lapp concludes.

In a similar study, Yale psychologist Kai Erikson researched West Virginia mining communities. Erikson’s findings regarding the impact of financial stress on marriages in poor communities were strikingly similar to Lapp’s: strong community support and involvement are essential to the ability of couples to remain married. Erikson proposes that marriages exist within a gravitational field of their communities, and that when the community fades, so does the ability to remain rooted in marriage: “Wholly devoted husbands and wives were to discover on Buffalo Creek that they did not know how to care for each other or to work together as a team or even to carry on satisfactory conversations when the community was no longer there to provide the context and set the cadence.”

This article began with a question: “How important is money when it comes to sustaining a marriage?” As it turns out, a more important question may be, “How strong is your community?”