Fitting In and the Development of Self 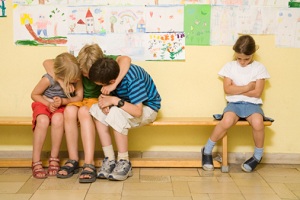 Many people have anxiety about fitting in. What this means varies with each person: being liked, accepted, acceptable, or some version of what you think will be attractive and pleasing to other people.

Looking at fitting in this way requires that you try to be just like the members of the group you want to fit into. You might think you have to put aside your own needs and desires and accede to the wishes of others. It can feel risky to express your thoughts and feelings.

Experiences where you don’t fit in can have a serious impact on how you think about yourself. As you try to make sense of those experiences, you might ask yourself the question, “What’s wrong with me? Why doesn’t anyone want to hang out with me?” Trying to answer that question can lead to ruminating, obsessive thinking, and focusing on your negative thoughts and feelings. Fear of rejection can further erode your concept of self and increase your anxiety about reaching out to others.

The anxiety of fitting in uses up a lot of energy because you have to work so hard to go along with what others seem to want. When you spend so much time trying to shape yourself into someone you think other people would like, you neglect the time and desire to develop your own unique self. As a result, there is little opportunity to develop what you think and feel.

Trying to Fit In Can Backfire
It makes sense that if you feel vulnerable and bad about yourself, you would want to be cautious about revealing who you are. But when you do this, you don’t offer other people anything, or anybody, to relate to. It’s funny, but feeling badly about yourself and being timid about letting people see your true self can actually increase your chances of being ignored or not seen at all. Because of this, timid, anxious people often end up feeling rejected even when there are no negative feelings directed toward them. This can affect your self-esteem and self-confidence and become part of a vicious circle that prevents you from reaching out to others.

If you can learn how to be a fuller person—someone with your own ideas, thoughts and feelings, who can express their wishes and desires, say what they want, and express what they are feeling—then other people will finally have someone they can react to. This means that you have to learn what you want, think, and feel and become more willing to express yourself.

It also means that you have to tolerate the possibility that someone will not wish to include you in their social circle. When you are no longer seen as invisible, people will react to you, for better or worse. Even though you open yourself up to negative reactions from other people, being present increases your opportunity for real dialogue and interpersonal connection. When you can learn to tolerate the possibility of rejection, you greatly increase your the chances of developing yourself and a social network that welcomes you.

Learning from Dave’s Story
Dave came to see me for psychotherapy because he felt depressed and lonely. After graduating from college, he felt like nobody wanted to be his friend or hang out with him. He felt like his college friends never really cared about or reached out to him, either. In college, he thought people might be more interested in him if he was more like them, so he would observe carefully to try and figure out what people liked and what was important to them.

He was continuing the same patterns now, but it wasn’t working with his coworkers either. He tried hard to please them, like buying them all tickets to a game (and pretending he got them for free) because he knew they liked baseball. They accepted, but didn’t become more sociable with him. He tried to organize a get-together at a bar they liked, and while a few people from work did show up, they still never invited him when they went out.

Dave couldn’t figure out what he was doing wrong and why people didn’t respond more positively to him. “I try to do all the things I think they will like, but no one ever invites me anywhere,” he said. I asked Dave what kind of things he would invite them to that he cared about. He looked puzzled by my question and said, “I guess I don’t know. I never really thought about what I want or like. It’s always seemed like the way to be liked and get people interested in me was to do what they liked or be like them.”

I pointed out to Dave that this wasn’t working, and asked him if there had ever been a time in his life when this did seem to work. Dave said that he thought he had some friends in elementary school, but recalled being worried that nobody wanted play dates with him. He also remembered his mom telling him that if he wanted the other kids to want to be with him, he would have to do the things they wanted to do. Dave remembered that he loved to draw and paint and do art projects, but his school friends were into action figures and sports. He said his mom encouraged him to put away his art stuff and get more involved in the activities his friends enjoyed.

By fifth grade, other kids seemed less interested in him even though he kept trying to figure out what they liked to do. I asked him what he enjoyed doing in the later grades of elementary school, and he said he couldn’t remember having any interests after stopping his art work. He never thought about what he wanted to do, just kept trying to figure out what he should be interested in so that his peers would want to be with him.

I could see that Dave had developed a pattern of neglecting the development of his self. He was not familiar enough with his own thoughts, feelings, and desires to feel good about himself or to feel self-confidence and self-worth. Dave needed to allow himself to discover his unique self and begin coping with the anxiety of revealing that self to the world. I believed that as he did this, he would find that people would start responding to him in positive ways  and wish to develop social relationships with him.  I felt that Dave’s depression would lessen when this occurred, and that he would continue develop greater self-esteem and self-confidence.