Finding the Meaning Behind What Your Partner Is Saying 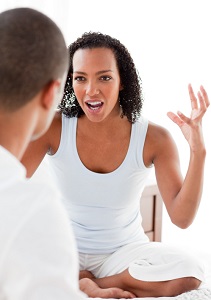 “I know you believe you understand what you think I said, but I’m not sure that what you heard is really what I meant.”

This unattributed quotation graced the walls of my dad’s office at the university where he taught, and as a child I spent many hours staring at it, pondering it, and even memorizing it. Something about the seeming absurdity of it spoke to 7-year-old me. I just thought it was funny. It is only recently that the true meaning and deep insight of that statement have become clear to me.

Communication can be complicated. There’s what we say—the actual words. There’s what we mean—the implied and explicit requests underlying what we are saying. And then there’s how what we say and mean is perceived and received. The filters that interpret information coming to us are shaped and influenced by our past experiences, our beliefs about ourselves and others, and our own concerns and insecurities. If we are inclined to hear criticism, we will hear it no matter the words or tone used.

I was working with a couple recently when a great example of this came up. One person made a statement which his partner interpreted as an expression of martyrdom. This triggered frustration in the receiver and resulted in an exasperated reply. This in turn shut down the sender and created a greater disconnect between them. When we dug a little deeper, we got to the root of the communication—which was that the sender of the message was expressing a very real, deep-seated fear about issues that were central to his sense of self and his place in the world. Once we identified what the true underlying message was, the receiver immediately shifted to a caring, empathetic response and the couple was able to connect in a powerful way.

So many times couples will argue about surface things—who said what, who did what, and when. They get caught up in the details and getting the “facts” straight. Great importance is placed on accuracy. “I never said that.” “I didn’t use those words.” “I only did that once, not twice.” “I don’t always do this—I haven’t done it in two weeks!” When the argument is about fact-checking, the emphasis is shifted away from the true reason for the communication. Since very rarely do we have “instant replay” capabilities in our daily lives, there is no way to satisfactorily resolve the fact-checking argument. Neither party is satisfied, both remain convinced that his or her remembered version of events is correct, and disconnection and entrenchment continue to grow.

When I work with couples, I try to focus the conversation away from the “facts.” I tell them that they are BOTH right. However they experienced the event(s) is their truth. Convincing the other of his or her “rightness” is unlikely, and ultimately—here’s the kicker—unimportant. Then I encourage them to discover the essence of what was trying to be communicated. What need was their partner expressing? What fears were underlying the message? What were they truly asking for? Sometimes the message is, “I am lonely.” “I want to be close to you but I don’t know how.” Sometimes the need being expressed is, “I want to connect with you.” Sometimes it is simply, “I want to be heard.” The fear might be, “I’m afraid if you really know me you won’t love me.”

How powerful might it be for all of us if, instead of the opening confusing quotation, we were able to say to one another: “I know that you heard what I meant, despite what I actually said.” How much could that shift the way we engage with one another? How much more satisfying would our exchanges and even our relationships be?