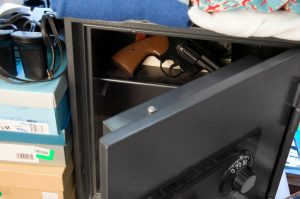 Men who own handguns are more likely to view the world as a dangerous, uncertain place, according to a study published in the journal Personality and Social Psychology Bulletin.

According to a 2016 CBS News poll, 36% of Americans either own a firearm or live with someone who does. This marks an overall decline in the gun ownership rate. In January 1994, 53% of Americans lived in a household with guns. The U.S. has the highest gun ownership per capita rate in the world.

The first three surveys occurred in May and June 2016, before the shooting at Orlando’s Pulse nightclub. The fourth study, which tracked a new group of male gun owners, occurred a week after the shooting.

Researchers found handgun owners feared a more pervasive and vague sense of threat in the world than those who opted not to own guns. Gun owners were more likely to see society as chaotic and the world as dangerous and unpredictable. These beliefs often figured prominently in their support for the second amendment. Owners who only had rifles and other long guns were less likely to share these beliefs. Solely long gun ownership was linked to hunting rather than a fear of threat.

Though the study’s authors thought the Pulse nightclub shooting might change the beliefs of some gun owners, they found the shooting had no effect.

Access to handguns may increase the risk of suicide. Research by the Harvard School of Public Health found states with higher gun ownership rates also have higher suicide rates. People who attempt suicide with a handgun are significantly more likely to die than those who use other methods.

There may be a correlation between some types of gun ownership and other mental health issues. For example, research published in 1997 found owners of semi-automatic guns are more likely than other gun owners to binge drink.

A 1995 study found, by a margin of 3 to 1, Americans feel less safe when more people in their communities have guns.