Does Your Dog Really Understand Emotion, and Other News 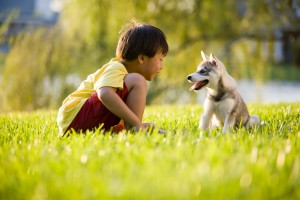 Some dog owners are often convinced their canine companions know how they are feeling and what they are thinking. Now, researchers have evidence to prove it. According to a study published in Biology Letters, dogs are able to recognize human emotions by combining multiple senses.

Dogs Can Recognize Emotions in Humans and Other Dogs

The ability to combine information from multiple senses has never been observed outside of humans, but a team of animal behavior experts and psychologists has determined dogs likely form abstract mental representations of humans’ emotional states rather than simply acting on previously learned behavior when responding to human expressions. Because at least two senses are involved, this is considered to be a high cognitive ability.

The team studied 17 domestic dogs, presenting them with paired images and sounds portraying different combinations of positive or negative emotions. Using photos of facial expressions and sound clips of vocalizations from both unfamiliar humans and dogs, the dogs faced two screens with projected photos of happy humans or dogs and angry humans or dogs. While the dogs looked at the screens, researchers played a single audio clip—a dog bark, someone speaking in Portuguese, or a neutral sound.

Researchers found the dogs focused on the photos that contained expressions matching the tone of the sounds they heard for a longer period of time than the unmatched photos. The dogs were especially good at this task when matching a dog bark to a photo of another dog, building on previous research that suggests dogs prefer looking at photos of other dogs rather than humans.

This study is the first of its kind to suggest dogs can interpret positive and negative emotions from both humans and other dogs.

Couples’ Quality of Life Linked Even When One Partner Dies

When a spouse dies, his or her characteristics are still intrinsically linked to the well-being of the surviving spouse, according to a new study published in Psychological Science. The research provided evidence for interdependence between partners, meaning someone’s quality of life earlier in the study was strongly associated with his or her partner’s quality of life later. Researchers say this interdependence link could even be as strong after the death of a spouse as it was when both partners were still living.

Lying or fibbing generally falls under the list of behaviors children are not encouraged to partake in, but a recent study suggests lying is actually an important milestone in cognitive development. Lead researcher Kang Lee says lying requires two main ingredients: theory of mind and executive function. Theory of mind enables a child to understand what is in someone else’s mind, and executive function gives a child the power to plan ahead and stop unwanted actions.

To Better Cope With Stress, Listen to Your Body

When people experience stress, their bodies respond in a multitude of ways. Heart rates increase, breathing gets shallow, and adrenaline races through the blood stream. However, remaining in this physical state of arousal can undermine physical and mental performance. New research on resilience suggests a person’s resiliency is largely based on body awareness rather than rational thinking. The researchers theorize that by paying attention to the body’s response to stressful situations, people may be able to improve reactions to stress and anxiety.

Families in television series such as 19 Kids and Counting and The Brady Bunch may make large families appealing to many, but new research shows children in larger families are at risk for falling behind in cognitive achievement and having behavior problems. Researchers speculate children with multiple siblings may receive less attention from parents in early childhood, and early childhood experience can have lasting impact.

Is Autism Hiding in a Fold of the Brain?

Scientists have long related autism with abnormal development of the brain, and recent research has discovered a cerebral marker specific to autism in a fold in Broca’s area, a region of the brain associated with language and communication. The marker can be detected by an MRI and is generally present in a child’s brain as early as age 2. Researchers say this discovery may help with earlier diagnosis and treatment of the condition.