Disability and Traumatic Shame: A Way Out 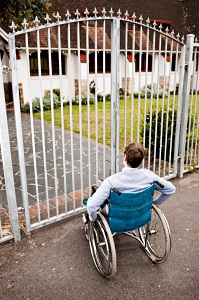 Many who live with disabilities are burdened by a chronic sense of shame that can be as difficult to live with as the actual disability. Shame is not the same as guilt. Shame is persistent and represents how we feel about ourselves (“I am a shame and disgrace”) rather than how we feel about something we did or did not do (“I feel guilty and embarrassed”).

The term “ashamed” is often used interchangeably with “humiliated.” Shame may be the result of humiliation, but not humility. Humiliation entails stripping a person of his or her sense or worth—of wounding the person’s very being. Humility is more a sense of meekness or equality with others. Dr. Brené Brown has been researching shame and vulnerability for a few years, asking people how they experience shame. Many say it makes them feel small and vulnerable; it includes an almost physical sensation of being kicked in the gut; it takes them to place that feels wounded; and they want to disappear.

How does this happen? How do we begin to feel wounded? Small? Vulnerable? Shamed? Humiliated? It is usually a response to something that happens to us—that is done to us. We are somehow victimized, humiliated, or traumatized by the actions of a person or people who inflict injury upon our sense of self—our very being.

This wounding may be intentional or inadvertent: The shame of a child whose first-grade teacher refused to allow her to go to the bathroom, resulting in an accident in her clothes in front of the whole class. The man who can’t read well enough to complete a job application being verbally harangued by an uncaring receptionist in front of an office full of people. A person in a wheelchair who is “holding up the line” for an elevator when a busy executive is in a hurry. The family with an older autistic child boarding an airplane in advance while others accuse them of making excuses to avoid waiting.

Regardless of the source, this pervasive sense of shame can result in a lifetime of fear, avoidance, and anxiety when faced with issues that trigger similar feelings. The triggers may be subtle and seemingly unconnected, but that feeling of being diminished remains.

For the first-grader who was humiliated by the refusal of her teacher to allow her to go to the bathroom, triggers may transfer to a dislike for authority figures, issues with toileting, or avoidance of school.

The man with difficulty reading who was humiliated by the lack of awareness or disregard of the receptionist may avoid looking for work, find that he is defensive with people working in offices, or resist going to the doctor if it requires filling out forms.

A person in a wheelchair who was humiliated due to holding up the elevator and inconveniencing the busy executive may avoid leaving home, resist taking the safety precautions necessary in a busy location, or feel “less than” people in white-collar jobs.

The family of the child with autism may avoid traveling by plane, become defensive when in need of special treatment, or limit interactions with people waiting in line.

I recommend that those who have feelings of shame learn more about the causes and triggers by getting professional help to address these feelings. Two types of therapy—EFT (emotional freedom technique, aka tapping) and EMDR (eye-movement desensitization reprocessing)—may reduce or eliminate shame reactions.