When Failure Takes Over 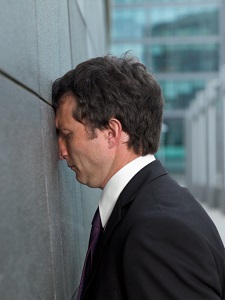 Sometimes people who have a tendency to be depressed get “triggered” and begin what I call “creating a case against themselves.” Failing at something can be one of those triggers, and more than one failure can trigger a storm. Once triggered, people may put together all the evidence they can find to prove they’re a failure. They think of every action or aspect of themselves they see as failure, currently or recently. They may not stop until they also catalogue failures from the past, and even ones that they think are likely in the future. They feel humiliated and worthless about the failures of the past and present, and panicky about the ones they expect in the future.

Let me give you a fictional example, based on my experience with this. Let’s say a man named Scott, who has a tendency to get depressed, makes a significant mistake at work. He feels regretful, disappointed, humiliated, and scared. He believes that his coworkers will think he’s not competent; that he may lose essential opportunities, maybe even lose his job. He thinks about all the people who know about his mistake and wonders how he’ll face them. He feels like he has let down his boss, who is disappointed in him and may regret trusting him. He wonders if he should have taken the job in the first place, because maybe he was never really competent enough.

Then he thinks about how little money he makes, and how his family struggles financially. He goes home, and his wife is mad at him for something she has always disliked about him. He finds out that his son failed a test, and that his bank account is overdrawn. He decides that he is not only failing at work, but also at his marriage, at parenting, at providing for his family, even at being a good man. He thinks about how much of a failure he’ll be if he gets fired too, or if his wife divorces him. Then he thinks about how he never hit a home run on the baseball team when he was a kid, the fact he had three different majors in college, and that he couldn’t get a job in any of those fields. He remembers that it was always the other person who ended every serious relationship he has had. He concludes that he is an utter failure in every arena. He has made such a good case against himself that anyone looking at these facts would be seriously concerned.

So the “attorney for the prosecution” has closed his argument, but the “attorney for the defense” has not spoken. Often, the other side never gets a chance to present a case. If it did, it would say Scott is a loving person, a committed husband, a hard-working employee, and a loving, fun, and responsible dad. It would say Scott was a sensitive and quiet kid, never good at sports but an amazing artist. It would note that Scott is working very hard at a job he got as a result of his intelligence and tenacity. It would point out that Scott was highly regarded at his job and had gone the extra mile to get promotions to better support his family. It would say Scott created beautiful sculptures on the weekends, and it is only because the world is generally hostile to artists that he has gotten no money or sense of success from them. It would remind the judge that everyone makes mistakes all the time, sometimes big ones, and that all the most successful people have failed at some point—or many—along the way. It would ask the judge to view Scott’s mistakes in the context of the good and successful things he has done, and all the successes and failures of all the people in the world in all of time.

The judge would declare that Scott is human, that he’d need to do whatever repairs he could on the mistake and learn from it so that he might not make it in the future. The judge would then dismiss any part of the case that predicted future failure, since no one can be held accountable for something that may or may not happen in the future.

This is a useful process for many of us when we perceive ourselves as failing: looking at what is true and false about this conclusion, putting it in perspective, and making a fair and accurate conclusion. Nobody is all failure, but whatever degree of failure you think you’ve achieved, look around and think of something you can do successfully right now … and do it. Count everything. Can you say, “I love you,” or smile and bring some warmth to someone? Can you take the library books back that are overdue? Can you eat a vegetable? It’s very important to count ALL successes, not just the big ones, and to add to them as much you can and not give up. If you see yourself as failing excessively, your expectations are too high! Bring your expectations down to what is realistic for you at the moment, and let yourself enjoy small successes.

That said, some research was done at the University of Kent in England, with surprising results. Drs. Joachim Stoeber and Dirk P. Janssen found that what was not effective for people in dealing with failure was social support, denial, venting, behavioral disengagement, and self-blame. What was effective in dealing with failure: humor, acceptance, and looking for the good in what happened.

When failure takes over and colors everything, people become depressed (and depressed people are more likely to perceive themselves as failures). It’s very important first to notice the tendency for one failure to grow into something global, and then, secondly, to counter it. Use whichever of these techniques work for you. If you have techniques I haven’t mentioned that work for you, please share them with us in the comments section below!