Dealing with Anxiety: How to Make Sushi Out of the Kraken 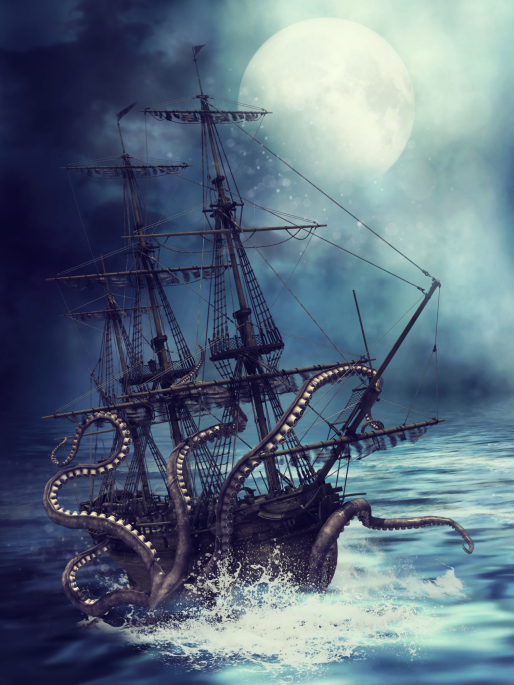 Anxiety is a state of overstimulation, with feeling tones of fear and dread. It’s often accompanied by worry about the future and the thought that things (whatever they are) are going to get much worse. According to the National Institute of Mental Health, anxiety concerns are one of the most common categories of mental health diagnosis in the United States, affecting approximately 40 million adults in any given year.

The kraken is a legendary sea monster found in Scandinavian maritime tradition. It is “free-floating,” or, not associated with any specific culture’s mythology, and is usually pictured as an immense cephalopod—the family including the octopus, squid, and cuttlefish. Cephalopods form an important part of the diet in many countries, where they are hauled up into boats like any other kind of seafood. But the kraken is so large it reverses this process, using its many arms to pull boats and even ships down below the surface of the sea to destruction. The sense of being overwhelmed is one way of describing anxiety.

Sushi is a method of serving seafood that renders it into very small portions, the size of appetizers. An important difference is that while appetizers get you ready for the main course—what’s coming next—sushi is all about focusing on the single portion in front of you.

In the following case, we’re going to look at a practice of separating potentially overwhelming experiences into smaller and more manageable units. As always, names have been changed, and individually identifying material has been filtered out.

Gina comes to therapy to address anxiety. She’s pretty sure this relates to her work, which is at an agency in a very competitive field. Because of this competition, staff are given high productivity goals, which include interacting with sometimes demanding clients, meeting these clients’ diverse needs, and writing detailed documentation of progress and results. Gina wonders early on in our sessions if she’s in the right line of work. Since this is the career path for which she got her degree, the question itself prompts some depressive responses.

I tell her I don’t know what she feels best suited for, though we can address this in our sessions. I wonder if it would be useful to start with decreasing her current level of anxiety, and then go on to explore issues related to a calling. Gina says she feels this would be useful.

We first make a list of Gina’s work-related duties. This has some immediate positive effects.

One, it puts Gina in the position of working on the problem rather than the problem working on her. She’s taken a step away from the kraken in order to see just how many arms it has.

Two, the overwhelming mass has been separated into different categories, and not all of the categories are equally problematic. For instance, she actually enjoys meeting new clients. We’ve begun dividing the kraken into more manageable portions, which as you might imagine has the effect of making the terrible beast much less active.

Also, we get to assess together the number of tasks Gina has to complete. It turns out there are a lot of them. We look at the fact most people would feel a bit overwhelmed by such a large number of duties. This decreases Gina’s worry that her anxiety is “symptomatic” and lets her experience it as a more normal response.

Is it possible that anxiety, managed, may have a positive effect in your life, enhancing both your engagement with the environment and a healthy adaptation to it?

Some of Gina’s tasks don’t seem like they can be broken down at first. One of these is documenting her services to clients. She tells me she’s literally never finished. Her current practice is to devote every spare minute she has to completing these reports. She says, “I feel like I’m always writing them. I even dream about them at night!”

I acknowledge how overwhelming a “never-ending task” must feel. We reframe this. Instead of “never-ending,” we note that each meeting with a client requires only one report. Looked at from this perspective, it becomes more manageable, more bite-sized. Then we consider how this might be given a more limited time rather than “every spare minute.” What comes to us is that Gina could devote an hour each morning—early, when the office is most quiet and she can concentrate—and the end of the day on Friday to her documentation. She notes that this feels doable, and I note that her level of stress as she says this seems decreased.

Another big issue is the weekly department meeting. This can go on for as long as three hours, attendance is mandatory, and Gina often has to give presentations at it. There’s no way she can break this down into smaller meetings. Is there?

By putting our heads together, we discover that there are some ways to separate this long period of time into smaller portions. One way is to bring a tasty snack with her and to eat it at a certain time (I suggest a doughnut, but Gina decides apple slices sprinkled with cinnamon make a better choice). Also, she can schedule strategic bathroom breaks for herself. We take a moment to consider why they’re called “breaks” and decide it’s because they break up the day into several “befores” and “afters.” And planning to have lunch immediately following the meeting, rather than going back to her office, gives her a reward after a challenge. This further delimits the meeting period and gives her something pleasant to look forward to during the meeting itself.

By using these techniques as well as others she develops (such as taking walks during break times, alternating difficult tasks with more enjoyable ones whenever possible, scheduling challenging clients in the morning when she’s fresh and never back-to-back) Gina effectively decreases her anxiety. With anxiety reduced to manageable levels, she’s better positioned to mindfully consider broad issues such as career path—though her current one is seeming a lot more viable to her.

We notice something else as well. Now that she’s not continually anxious, Gina discovers that occasional anxiety is a useful thing. It lets her know where she needs to focus—for instance, on an upcoming deadline for which she isn’t fully prepared. It also helps her persist at tasks that aren’t her favorites, such as writing the reports.

Can Anxiety Serve You?

We’ve used the fantastic image of the kraken to look at some of the effects of anxiety, and the more familiar image of sushi to outline techniques for managing these effects. It turns out that the threatening sea monster and the nourishing meal differ in size, not quality. I invite you to consider how this practice of separating large and possibly overwhelming issues into smaller steps might be useful to you. Is it possible that anxiety, managed, may have a positive effect in your life, enhancing both your engagement with the environment and a healthy adaptation to it?