Couples Who Divide Chores May Have Better Sex Lives 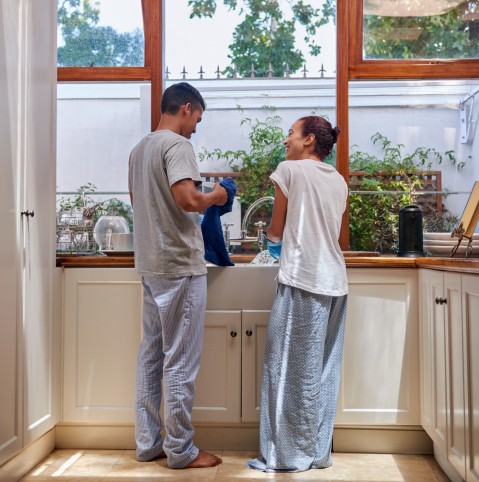 Couples who evenly split household labor have more frequent and higher quality sex, according to a study published online in the Journal of Family Psychology. The latest research contradicts a 2012 study suggesting men who do stereotypically “female” tasks have less sex.

Housework consistently ranks among the leading sources of conflict for married couples, and research shows that men still do less, on average, than women. A previous study that looked at a representative sample of the population found that husbands create seven additional hours of housework per week for their wives. Thus many therapists and other marriage experts were surprised when researchers began claiming that fair contributions to housework undermine a couple’s sex life. The latest research may offer hope to women who want their partners to do more to help around the house.

Matt Johnson, a family ecology professor at the University of Alberta, combed through data from a five-year study of 1,338 heterosexual German couples. He found no connection between the amount of housework the man did and the couple’s sex life.

However, when Johnson looked at how men felt about their contributions, a pattern emerged. Men who reported that the division of labor in their house was fair had more frequent and more satisfying sex with their partners. Even a year later, both partners reported that men’s fair contributions to household labor produced better and more frequent sex.

Johnson acknowledges that gender roles in Germany tend to be more restrictive than in the United States, with German men typically doing slightly less housework than their American counterparts. Johnson expected a more pronounced negative impact of household chores on the sex lives of men in Germany, but he found the opposite was true. Based on his research, Johnson says American men may benefit just as much as German men by doing more work around the house.