Could Hunger Harm Your Marriage? 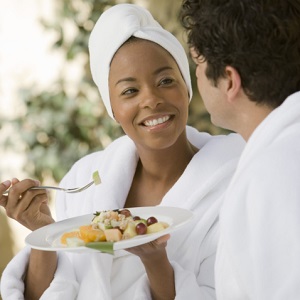 If you’ve ever felt like you’re not quite yourself when you’re feeling hungry, you could be onto something. About 20% of people are on a diet at any given time. Assuming the premise of most diets is restriction, that means there are many hungry people in the world. A new study suggests hunger can actually play a role in aggression between spouses.

Each of the 107 couples got a voodoo doll that was supposed to represent their spouse. Three weeks later, researchers examined the voodoo dolls for damage, and found that those belonging to people with low blood sugar levels had more pins stuck in them.

Bushman argues that there’s a close correlation between blood glucose and aggression, emphasizing that the body only has so many resources. When it runs low on fuel, self-control may take a hit. He points to research showing that people with diabetes—who struggle with frequent blood sugar drops— have higher average aggression levels than people without the health issue.

What Does It All Mean?

While feelings of frustration and anger may feel involuntary, sticking pins in a voodoo doll is a choice. While hunger may lower thresholds for aggression, it doesn’t make aggression an inevitable conclusion. And not everyone agrees that low glucose leads to aggression. University of Pennsylvania psychologist Robert Kurzban, for example, emphasized to The New Yorker that it’s actually rare for the brain to experience low glucose. He points to marathon runners who all have low glucose levels at the end of a race, but who don’t suddenly become roving threats to society.

A University of Miami psychologist, Michael McCullough, points out that humans have had to deal with periods of hunger for most of our history. He doesn’t believe that an aggressive response to brief hunger makes sense in light of our evolutionary history.

The debate about the role of glucose in mood is ongoing, but one thing is certain: unhealthy food deprivation isn’t good for anyone. If you want to stay on the safe side, make sure you eat meals several times a day—even if you don’t have a voodoo doll.