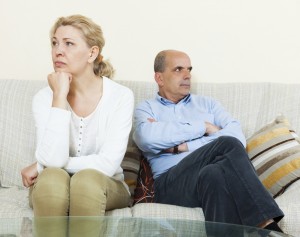 Diane is seething. Tina let her down—again. It’s after 10 p.m. and Tina is still not home, despite the fact she agreed to take care of dinner for the family. Diane not only had to cook dinner but also put the children to bed by herself again. She feels like she and the children come in a distant second to work in Tina’s life and she’s sick of it. Diane finds herself wondering if Tina cares about her at all. If she cared, why does she keep disappointing her over and over again? She wonders if she and the children are even a factor in Tina’s decisions. She feels alone, hurt, and angry.

Tina comes home and notices Diane is not happy. Tina asks what is wrong, but Diane says nothing and goes to bed without letting her feelings be known.

This scene, or one similar to it, plays out time and again for couples. Avoiding conflict can seem like a positive thing, and many people even believe that happy couples don’t fight at all.

This could not be further from the truth. Actually, the opposite is true—conflict avoidance can be downright toxic to relationships. Keeping painful feelings such as anger, loneliness, and despair to yourself in your relationship doesn’t make them disappear. On the contrary, trying to hold them in, rather than discussing them with your partner, can quickly lead to deep resentment that will create a tremendous gulf between you. So, while the goal of avoiding conflict might be to keep the peace, it often ends up creating more problems.

Certainly, there is still a lot to be said for the old adage, “Pick your battles.” Airing every single minute annoyance with your partner will create its own toxic dynamic in your relationship. So what should you bring to your partner and what should you keep to yourself?

Looking back at the example of Diane and Tina, this seems like something that needs to be discussed. Tina’s failure to keep her promises to her family is something that happens regularly. It wasn’t a fluke caused by an extra busy day at work. Tina’s behavior also seems to be causing Diane so much distress that she is questioning whether Tina even cares about her or their children. The frequency and the depth of the feelings involved are two pretty good indicators that a conversation is necessary.

The good news is that engaging in conflict in a healthy way can strengthen connections. For example, if Diane takes her issue to Tina, she might feel scared and Tina might get angry. It might turn into a fight. Tina might even take it as an opportunity to lodge some complaints against Diane. An all-out fight might ensue.

But if Diane and Tina are able stick with the discussion and use empathy to try to really understand each other’s experience, they will likely develop a deeper understanding of one another. Diane might come to appreciate the amount of stress that Tina feels over being the family’s primary breadwinner, and Tina might come to understand that Diane feels unappreciated and alone in the parenting and domestic tasks she is responsible for. As a result of this discussion, Tina might try to get home a little earlier and communicate how much she appreciates Diane’s work around the house, and Diane might be more vocal about her appreciation of the financial contribution Tina makes to the family.

With a little time, patience, and empathy, Diane and Tina might find that they resolved the issue and deepened the intimacy in their relationship in the process.

Some couples who have been avoiding conflict in their relationships for a long time might find that too much resentment has built up over time. They might not be able to make this shift on their own. They might find it beneficial to work with a couples therapist who can help them sort through the pain that underlies the resentment and learn new ways of communicating with one another.

The bottom line is that when two people come together to share their lives with each other, conflict is inevitable, but accepting it and learning to engage with each other in healthy ways will likely enrich the relationship.