Confined or Not? Reflections on Disability, Language, and Microaggression 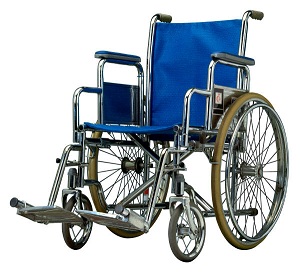 I first met Milton when I had my law office downtown about 20 years ago. He was selling flowers and dispensing good cheer to passersby on a street corner on my way to and from the courthouse. One day I treated myself to one of Milton’s lovely roses and we struck up a friendship of sorts. I no longer have a downtown office or a law practice, but Milton is still there. According to a recent news story, he still sells flowers and shares happiness with others—and it seems some of them are repaying him for what he has given them over the years.

Milton has cerebral palsy. His speech is difficult to understand, his limb movements seem labored and jerky, and he appears frail, but he makes it to the downtown area just about every weekday in the customized wheelchair that has allowed him the freedom to get up every morning and ride the bus there from his neighborhood on the west side for the past several years. It’s breaking down, though, and apparently whatever insurance coverage Milton has, if any, will not be sufficient to pay the cost of replacing the worn-out chair—so the downtown businesspeople have started collecting money to help him out.

What has motivated the generosity of these good folks? Do they just feel sorry for Milton and his circumstances? I don’t think so. You see, Milton is a good businessman: he gives value-added service. If you ask him, Milton will say that life is good, that it’s a great day, and you find yourself having to agree. That feeling of good cheer remains long after your flowers have withered and died. I think what is felt for Milton is respect and appreciation, not pity.

As I promised in the title, here’s the part about language. The news article about Milton says he thinks that the wheelchair frees him from the boundaries of his home and allows him to feel like a valued participant in the world around him. Not once in the article do I read that Milton is “confined” to his wheelchair or “wheelchair bound.” I think that’s significant. Here’s why.

Microaggression is an example of negative, disempowering communication. A microaggression occurs when a member of a traditionally privileged group (in this case, able-bodied persons) makes a statement toward or about someone from a traditionally marginalized group (here, people with disabilities) that has the effect of increasing the stature of the speaker but diminishing that of the recipient or subject. Although this issue has not been addressed, to my knowledge, in the literature on microaggression, I believe that traditionally marginalized group members can become microaggressors, too, as the result of internalizing disempowering messages received throughout life.

Microaggressions often are unintended and committed simply through blitheness. If challenged, a perpetrator will often protest, asserting that the offended party is being overly sensitive and that s/he “didn’t mean anything offensive!” Nonetheless, harm has been done, covertly or openly, through the perpetuation of a negative stereotype, leaving the recipient feeling “one down.”

More often, I suspect, microaggression reflects the privileged speaker/writer’s fear of powerlessness and inability to cope in a situation similar to that of the marginalized subject. In reality, though, with only a few exceptions, we aren’t very accurate at guessing how changed life circumstances would affect our level of happiness. There’s some significant research backing up this contention. Studies suggest that many of us, when life circumstances change for the worse, adjust our indicia of happiness accordingly. Small things we wouldn’t have expected begin to make us feel good.

I don’t know whether the writer of the news story on Milton is able-bodied or has a physical disability. Whatever the perspective, instead of committing the microaggression of portraying Milton as a pitiful victim of circumstance, the writer of this piece chose to give credence to Milton’s self-judgment and worldview. Unlike so many that I (and perhaps you, too) have read over the years, the piece is informative without becoming sensational or maudlin. I think, overall, that journalism is improving in that regard.

I believe Milton when he says that life is good. I would never try to convince him or portray it otherwise. As to whether, placed in his circumstances, I’d be able to say the same, I doubt it—but unless I actually become Milton I will never truly know, because I can’t help but view the mental picture of me living Milton’s life through the filter of my own experience and mindset. I must therefore refrain from expressing my assumptions about his life as certainties and from substituting my judgment about what his life is like for his.

Occasionally, I feel I must challenge those microaggressors who insist that they understand my “situation” (usually anything from merely difficult to really awful) because they know someone else who’s “wheelchair confined” or “wheelchair bound.” I wonder whether they believe me when I tell them that people who utilize wheelchairs are not all the same, that sometimes I have problems as everyone does, that I get over them, and that I enjoy my life. Thankfully, I’m choosing to waste less energy these days in attempts to educate them.

Kudos to Milton, to the business folk who are helping him out, and especially to the news writer, for allowing Milton to speak his truth. If you’d like to access the story, follow this link: http://discussions.orlandosentinel.com/20/orlnews/os-milton-mcknight-wheelchair-20120311/10

To get a more authoritative perspective on how hard it is to know whether we’d be happy in drastically altered life circumstances, I recommend reading Stumbling on Happiness by Harvard psychologist and Professor Daniel Gilbert.

Related articles:
The Inner Voices of Prejudice and Discrimination