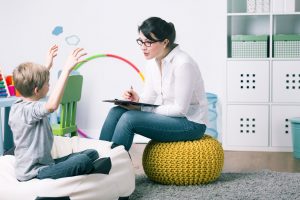 A new computer system that can screen young children for language and speech disorders was unveiled last month by researchers from Massachusetts Institute of Technology (MIT) and Massachusetts General Hospital. Previous research has found as many as 60% of children who have speech and language disorders go undiagnosed until kindergarten or later, which can have negative effects for both academics and mental health.

In the testing, young children who are just beginning to develop language skills are given a simple story narrative alongside corresponding images, then asked to repeat the story using their own words. In all, the system looks for 13 distinct acoustic features that help pinpoint positive matches for varying speech and language conditions. For example, the system can evaluate the number of pauses a child takes while speaking—or the average lengths of those pauses—and compare that information to known data related to multiple diagnoses at once.

Children with speech or language disorders that go undiagnosed are at greater risk for academic difficulties and social barriers later in life. Early detection can be crucial to developing a successful plan of action.

Eventually, the project developers hope to adapt their creation into something accessible through a smartphone or tablet, which would drastically increase the number of children who could be tested.

How Earlier Language Testing Can Help

Early results of the testing look positive, according to MIT professor John Guttag, a noted enthusiast in the field of machine learning and ways such technologies can benefit society and health care. Machine learning is usually driven by data, discerning hints and inferences that are not readily intuitive from human observation. In this case, the system evaluates test subjects against existing training materials for particular diagnoses, looking for tell-tale markers for speech and language issues, including disruptions in speech and unique utterances.

Guttag says these and other types of machine learning technologies will bring some pretty dramatic changes in the next few years, both in health care and beyond. As one of the fastest-growing fields in computer science, big data is quickly demonstrating its power and flexibility to put information to use.

By offering a greater chance of detection for families of children with speech or language disorders, they may be able to lower the risk of related academic or mental health concerns later on.