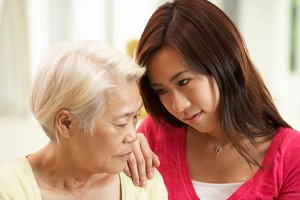 Many families have developed a multigenerational pattern where children learn at an early age that it is their job to make sure that a parent does not have to experience intolerable feelings like anxiety and depression. The emotional caretaker child comes to understand that he or she is expected to take on this role in the family.

When the child does not succeed, and the parent is in an intolerable feeling state, the child can feel emotionally abandoned, bad, anxious, or many other painful feelings. The child who is the emotional caretaker frequently continues in that role with his or her own children.

If that same child grows up and doesn’t succeed in soothing her children’s feelings, she may feel anxious, like a bad mother or unloved. In both cases, she feels responsible for emotional caretaking and becomes compelled to continue in this role or risk having to experience her own intolerable feelings.

Karen came to see me for her first session in a very anxious state. Before I could ask about what brought her to my office, she began to sob.

“I don’t know what to do. I am beside myself with worry about my son, Michael. Nine-year-old little boys shouldn’t have to be in so much emotional pain. He is having so much trouble making friends—more this year than ever before.

“I thought maybe if he joined the soccer team, it would promote some relationships, but now he suffers because he doesn’t play so well. My husband took him out in the back yard to practice, but he just gets frustrated and starts to cry. I think he might be depressed and I’m sure he’s anxious.”

“This sounds so painful for you, too. Tell me more about what it’s like for you to have to deal with Michael’s feelings. “

“I can’t bear it. I feel like such a terrible mother. I’ve tried everything. He’s a pretty good talker and will talk with me about how he feels and what he’s doing. I try so hard to make him feel better, to give him suggestions about things to say and do with the kids in school.

“I try and arrange play dates, but most of the mothers I call tell me their sons don’t want a play date with Michael right now. I think, ‘what is wrong with my child?’ He’s such a sweet boy. He’s funny and smart. He does pretty well in school. The teachers say he’s shy and not to worry, that he’ll grow out of it. He is close to one boy and they spend a lot of time together, mostly playing video games. He just seems unhappy. I’m his mother and I’m supposed to make him happy. What is wrong with me?”

As Karen and I began our work in therapy, it was important for me to remember that Karen, not Michael, was my patient. I wondered with Karen whether she thought it might help Michael to see a therapist and she and her husband decided to wait and see how the school year progressed.

Karen and I have been talking about her anxiety, not only in relation to Michael, but in her life in general. Karen describes herself as an anxious person and says she was anxious as far back as she can remember. Her earliest memories were of being anxious because her mother was anxious.

She told me, “It’s not like I was old enough to know that it was called anxiety or that I got anxious when she did. But as I got older, I could see how her anxiety filled the house. She and my father fought a lot and she always seemed on the edge with him.

“One time, I think I must have been about six or seven, when I heard them fighting. She ran out of the room and was crying. I ran right up to her. I was shaking. I put my arms around her and said something like ‘mommy, it’s okay. You’ll be okay. I’ll take care of you.’ She sobbed into my shoulder. Some version of her getting upset, me getting anxious, and trying to make her feel better has been happening most of my life.”

It has been many months since Karen and I have been exploring her anxiety in relationship to her mother and to Michael. Karen has explained the way she thinks about her mother’s history:

“When I was a kid, my mother sometimes talked about her father, who we rarely saw, I thought because he and my grandmother lived so far away. I must have been about ten when mom confided in me (I don’t remember why) that he would beat her with a strap when she was a kid. She was terrified of him.

“I used to think about this when my mother would get into a state about something. I didn’t think about trauma then, but I think I had the idea that she was traumatized and so she was fragile and needed me to take care of her. I still have that idea.

“Since I’ve been coming to see you I’ve become more aware how I feel so compelled to make her feel okay. I understand (in my head, at least) that parents are supposed to take care of their children, not the other way around. But I feel so bad for her.

“I also get scared. I know that when she doesn’t feel like I’ve soothed her, she can get very angry at me. Sometimes she gets really cold. More than anything, when she stops being a loving mother, I panic and get terrified. I think I’ve lost her.”

Karen’s experience with her mother is driven by Karen’s need to protect herself from feeling like a bad daughter and from the anxiety and terror of feeling like an abandoned child. As long as Karen can feel her mother is okay, she can relax and feel that she is okay too.

Karen had little experience being soothed by her mother, who was consumed with anxiety. The need to keep her mother happy was the way for Karen to soothe herself and maintain her own sense of well-being in the face of the threat of her mother’s anger and emotional abandonment.

Once Michael was born, the relationship dynamics with her mother were repeated with her child. Now she had to protect herself from feeling like a bad mother and from the anxiety and terror of feeling like she is abandoning her son and/or that her son could reject her. Because Karen was so often at risk for feeling intense anxiety when she has those bad person feelings, she did not have the mental and emotional space to consider her own needs and develop a sense of self separate from her mother and child.

When Karen sobbed, “What is wrong with me?” she was not only expressing her belief that she doesn’t measure up to some image of daughter or mother. To feel good about herself, she needs to feel that her mother and son recognize her value as a person.

Her feelings of self-esteem and self-confidence hinge on their approval and on the evidence that she has succeeded in making sure that mother and child are happy. Essentially, who Karen is and what she wants disappear in these relationships.

Since starting therapy, Karen has begun the difficult journey to find balance between taking care of the feelings of the people she loves and taking care of herself. She had become so dependent on successfully soothing significant others (especially anxious others) for her feelings of self-worth that she had not learned to notice and take in the ways in which she is recognized and valued in the world.

For example, Karen’s husband is loving and admiring. Karen works as a financial analyst and has received multiple promotions and excellent evaluations. She also has a network of people, whose friendships date back to kindergarten, that she is in frequent touch with. When reminded of this, Karen will sheepishly admit, “Yes, I know; my husband, my boss, my friends—everyone thinks I’m a good person. “

“Okay, I admit it, they do act as if I’m great, but I don’t really give it much weight. I don’t feel like such a good person. I know I have to change that.”

Karen is slowly and carefully working on risking and tolerating negative responses from her mother and son if she doesn’t provide total soothing of their anxieties. She can rationally consider that her fears of loss and rejection may not be realistic. She can acknowledge that Michael and her mother are very attached to her and that she is not the only one who has something to lose.

But this does not yet feel emotionally true. Even though it will take some time for Karen to emotionally believe that she is not as at risk as she feels, she has begun to test the water and do less emotional caretaking.

Karen has come to understand that she can’t make herself feel okay by keeping her mother and son feeling okay. As she says, “I have to give this quest up if I’m going to stop asking ‘what’s wrong with me?’ This is so hard and I don’t know if I can do it. I have to do it.”

Karen’s determination to develop her feelings of self-worth and become more separate from her mother and son are growing. Her desire to stop her self-attacks and increase her self-confidence and self-esteem reinforces her capacity to endure the anxiety of changing the ways she relates to her mother and son. She is on her way to creating a space where her own needs and wishes can be expressed and responded to.