May 14, 2010 • Share Your Story contribution by Kathleen Rohan, KnowCancer.com 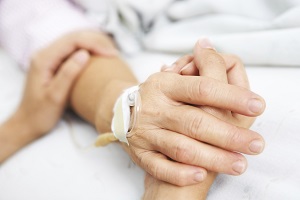 I have taken on many roles in my life: daughter, sister, friend, cousin, niece, girlfriend, fiancé, college graduate, wife, and new mother. But in April of 2008, I took on a very unexpected role that challenged me more than I ever could have imagined: I became the caretaker for my then 27-year-old husband.

My husband, Nolan, battled testicular cancer before we met. At the age of 18, when he should have been worrying about the prom and high school graduation, he began intense rounds of chemotherapy, underwent several invasive surgeries, and suffered from surgical complications that landed him in the intensive care unit for months at a time. The doctors prepared his parents for the possibility that he might not survive.

But when I met him in 2000, he was recovering and miraculously cancer-free. Soon he was considered “cured,” a word rarely used when referring to cancer patients. We were young, eager for life, and in love. We both worked hard in building our careers, married, and began a family (another miracle doctors couldn’t quite explain).

We kept a distant eye on his previous cancer battles, but to be honest, neither of us ever believed that it would come back. After five years of being cancer-free, he was told he could reduce his check-ups to every two years with a simple tumor marker blood test.

Like many young couples, we thought we were untouchable.

But in 2008, the unthinkable happened and my new job began: caretaker for a cancer patient. Caretaker for a person who was faced with battling a hideous, overwhelming disease. Caretaker for my young husband who I could never imagine living without.

Being the control freak that I am, I jumped into the role minutes after doctors confirmed his cancer had aggressively returned. My immediate response was to cry, call my Dad, and dive right in. I had to do something. The only thing worse than learning that your husband has cancer is learning he has cancer and there is nothing you can do about it, nothing you can do to stop it. I was willing to do anything to help.

I began by ensuring he was admitted into the hospital and in his own room by morning. That his oncologist was there, the necessary follow-up tests and biopsies were performed in a timely manner and his treatment began as soon as possible. I made sure our son was taken care of and arranged a schedule of family and friends to watch him so I could be by Nolan’s side.

Little did I know at that time how much there would be to do. I arranged doctor’s appointments, blood tests, CT scans, MRIs, PET scans, chemo infusions and radiation treatments. I researched treatment options, filled prescriptions, researched other specialists, bought food to fill chemo cravings, rented movies, scheduled friends to visit while I worked and arranged mini-vacations. I read about experimental drugs, arranged trips to out-of-state cancer centers, filled out insurance paperwork, planned our first family trip to Disney World, bought new pillows and appealed countless insurance decisions. I tried to be by his side through it all.

But despite the never-ending to-do list that could rival any CEO’s daily agenda, it was never enough. Never enough to do the one thing I wanted to do more than anything: make the cancer disappear. In the end, that is the hardest item on any caregiver’s to-do list: accepting that some things are simply unachievable and learning to let them go.

© Copyright 2010 by Kathleen Rohan. All Rights Reserved. Permission to publish granted to GoodTherapy.org.