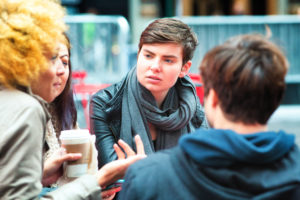 Gender nonbinary people—who often call themselves enby—do not identify with the male-female gender binary. There are a wide range of gender expressions and identities under the enby umbrella, including agender, gender outlaw, genderqueer, and genderfluid. Gender nonbinary people are not a monolith. Some see gender as a problematic concept to be rejected and fought. Others do not object to gender yet feel they personally do not fit into a specific gender identity. Many enbies identify as trans.

Trans people often report a feeling of gender dysphoria. This is stress, anxiety, and frustration associated with being labeled as a gender with which one does not identify. For example, a trans boy whose parents force him to wear dresses may feel intense gender dysphoria that affects his self-esteem and mental health. Gender dysphoria is highly prevalent among people who are not allowed to express their gender identity.

A person does not have to identify with either the male or female gender to experience dysphoria. Enbies can feel dysphoria, too.

Some of the DSM-5’s diagnostic criteria for gender dysphoria are inclusive of enbies. Common symptoms include:

Gender dysphoria in nonbinary people may manifest in slightly different ways, including:

Binary trans people—those who identify as male or female—and enbies generally report developing gender dysphoria around the same time. For most people dysphoria sets in around puberty, getting progressively more intense as puberty changes the body.

John Sovec, LMFT, a California therapist who works with LGBT clients, says, “Gender dysphoria is often discussed in the treatment of adult nonbinary clients, but it is important to also note its influence on the development of nonbinary adolescents. When you reflect on the pressures to fit in that already exist in a teen’s world, imagine the distress and anxiety that can manifest when gender dysphoria is present.

“It is important to assist adolescents in establishing their identity by actively exploring identity-related choices and encouraging identity development in their affirmed identity in a safe and supportive environment.”

The study also found that older enbies (aged 19-25) were significantly more likely than older binary youth to avoid necessary health care. However, younger enbies and binary trans people (aged 14-18) saw no differences in foregoing primary health care. Cultural shifts in attitudes regarding gender may play a role in this. As awareness of enbies increases, so too may the willingness of younger enbies to identify as nonbinary and demand gender-affirming health care.

Gender nonbinary people are sometimes reluctant to seek health care for gender dysphoria, as well as for unrelated issues. This may be because doctors commonly believe inaccurate stereotypes about enbies or are unaware of their existence.

A 2017 study of enbies seeking health care found that they often feel misunderstood, stigmatized, disrespected, or pigeonholed into the incorrect gender. Even when enbies seek care at gender-affirming clinics, they may encounter clinicians who are accustomed to relying on a strict gender binary. According to the study, nonbinary people may feel pressure to conform to the gender binary in health care settings.

In some cases, a health care provider may trigger feelings of dysphoria. For example, a doctor might call a chest binder a bra. This can deter enbies from seeking appropriate medical care and make it more difficult to access hormonal therapies and other treatments for dysphoria.

How Therapy Can Help Nonbinary People with Gender Dysphoria

The right therapist can provide a supportive, affirming environment for enbies with gender dysphoria. In therapy, a nonbinary person can discuss their feelings about gender in general, as well as their own gender identity. Therapy that supports these feelings instead of stigmatizing them can be a powerful antidote to the pressure many nonbinary people face to conform to a gender binary.

A therapist may also:

In therapy, a nonbinary person can better understand their own identity, become a stronger advocate for their needs, and tackle internalized dysphoria and transphobia.