Can Gay Families Teach Us about Gender Identity? 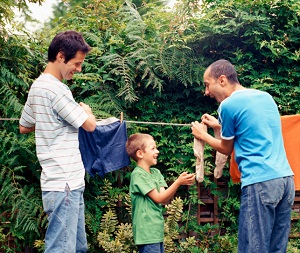 For years in our culture, most of us have defined family in a particular way. We assume that when we say “family” we mean a group of people who are related by birth, adoption, and marriage. And when we say marriage, we have pictured the promised relationships between men and women.

But, gradually, these meanings are changing. Gays and lesbians have won the right to marry in five states, with number six, California, embroiled in a legal battle over the reversal of the 2008 state law allowing homosexual marriages. While many of us keep our eye on the legal and religious debates around this political movement regarding the right to marry, a new study, published this past week in the journal Pediatrics, has stirred up my thinking about parenting and the modeling of gender.

This study, to break a complex research process into very general statements, found that children raised in “planned lesbian families,” those families formed by partnered or single lesbian mothers prior to the birth or adoption of children, showed children whose scores on development and social behavior looked very similar to children raised by heterosexual parents. The authors expected to find this. But what they didn’t expect to find was that the children raised in lesbian homes scored higher than their straight family peers in some categories of self-esteem and confidence, were stronger students academically and were less apt to struggle with difficult behaviors like aggression and rule breaking.

It’s a remarkable set of findings that will take some time to make its way into popular thought. One of the study’s authors, Dr. Nanette Gartrell, Professor of Psychiatry at the University of California at San Francisco, has studied lesbian families for the last 24 years. She comments in an article at Time.com about why lesbian parents often raise such resilient children:

The same research revealed a higher level of stress in children raised in lesbian households during early childhood, the result of dealing with teasing, social stigmas, and the unique difficulties of living as a minority. But by the age of 17, the levels of stress even out, probably because of the problem solving, communication, and other skills most of these mothers employ in their homes to help their children adjust, respond, and thrive in a majority culture.

So, if children raised in lesbian households are doing well, and by some measures are thriving compared with their majority straight-family peers, I’ve been wondering about another measure of personal wellness and development we generally ascribe to family and parenting: gender identity. Age-old assumptions that children need a parent of their biological gender present in the family in order to complete their own emotional and sexual development may, in fact, be unfounded. In other words, Billy may not need a Dad to understand his maleness. Andrea may not need a Mom to understand her femaleness.

Just as this new research is beginning to teach us about the key qualities that parents of any gender can use to raise healthy, resilient, successful children, similar research is needed to tease out the key factors that enable children to live into their own sense of gender identity. After all, families of one parent have been raising a large number of children in our culture and around the world for millennia. And while very few of the children of these single parent families identify as having personal struggle with their own gender identity, many sociologists, historians and psychologists argue that being raised in a single parent home, most often the mother, leaves boys without the modeling of adult men as fathers who can love children, their partners, and lead happy, connected, and responsible lives.

Whatever we learn about gay and lesbian families from this emerging research, you can be sure that it will help us all to expand our experience of family, marriage, and parenting roles. And no matter how we configure our own families, we all need help and inspiration to be the best parents we know how to be. Our children depend on it.