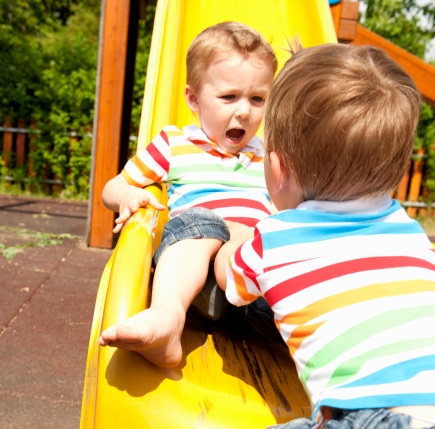 Most parents are concerned about bullying at school and online, but they may not notice the bullying that takes place right in front of them: bullying between siblings. According to a new study, children whose siblings bully them are at an increased risk for depression, and may even develop self-harm behaviors.

The study, which was published in Pediatrics, looked at 7,000 12-year-olds who completed questionnaires by mail in 2003 and 2004. The questionnaires asked children if they had been bullied by their siblings, and encouraged kids to detail the specifics of the bullying. The study followed up with the children when they turned 18, using a questionnaire called the Clinical Interview Schedule to evaluate the teens’ mental health.

The study’s authors emphasize that it’s not just gentle teasing or occasional sibling squabbles that yield these results. Instead, children bullied by siblings were subjected to ongoing bullying campaigns across an extended period of time. Results of this study indicate that sibling bullying has similar effects to bullying by peers.

Vicki Botnick, MA, MS, MFTI, a GoodTherapy.org parenting Topic Expert, advises parents that sibling bullying warrants immediate intervention. “All siblings fight, but I’d call it bullying if there was repeated violence, or verbal and psychological harassment that becomes so consistent and so cruel that it constitutes abuse. Some signs might be if one child is always the victim while the others is always the aggressor, if the victimized child is losing sleep or acting fearful, or if one child does not ever seem to know how to stand up for herself or say no,” Botnick explains.

Botnick emphasizes the importance of understanding what contributes to the bullying while keeping the victim safe. “The top priority, of course, is protecting the bullied child. With each conflict, give each child time and space to safely tell her part of the story. They can learn to communicate better with each other and develop empathy for one another by talking about how they feel, rather than just stating what they’re angry about and what seems unfair to them. Then help them build conflict resolution skills by asking for their input on possible solutions. Let them figure out what consequences might be fair for their actions, and be consistent and firm about house rules for safety and mutual respect,” she says.

Ruth Wyatt, LCSW, MA, also a GoodTherapy.org parenting Topic Expert, adds that bullying can make children feel unprotected by their parents, explaining, “A child that is being bullied by a sibling is a child who does not feel safe in his/her own home and, what’s more, does not feel protected by his/her parents. This is the double whammy of sibling bullying- the bullied feels scared of his/her sibling and unprotected by his/her parents. This goes for the bully as well, as the bully is often filled with shame and a sense of being out of control and unsafe.”

Wyatt cautions that in discussions of child abuse, abuse between siblings is often neglected. Parents need to take this bullying seriously. Wyatt emphasizes, “If you believe your child is being bullied by a sibling, if your child seems nervous around or afraid of his/her sibling, or if you have witnessed questionable behavior, you should intervene. You should speak separately with each of the children involved, getting information and laying down the law: Bullying will not be tolerated; bullying will have consequences. When laying down the law, be very specific about which actions are unacceptable and what the consequences will be.” Wyatt advises that family therapy may help stop sibling bullying, and is a necessary intervention when traditional discipline techniques don’t work to stop the abuse.