December 24, 2015 • A GoodTherapy.org Announcement by Will King, Contributor 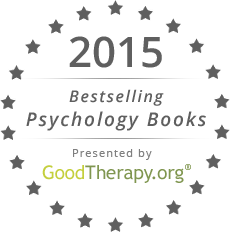 The bestselling psychology books of 2015 offer diverse topics from a broad range of experts as well as authors and journalists. Each title is devoted to improving mental health and the tools that can foster progress. Alternative approaches to institutional wisdom repeat across several titles, including a sharpened understanding of the brain’s plasticity and the perhaps indefinable nature of the human spirit.

Life stories play a recurring theme with this list, examining systemic shortcomings against an individual’s plight and using wit and humor to soften the edges. Optimism and a greater awareness of the landscape involved serve as a connecting thread between titles.

Between the World and Me by Ta-Nehisi Coates

Issues of pride, identity, and justice converge in Ta-Nehisi Coates’ extended letter to his teenage son. The author’s intent is to make some sense of a world where social injustice lingers through generations—a world statistically more dangerous for his son based on the color of his skin. Described as both bleak and beautiful, Between the World and Me blends poetry and backstory across Africa’s twisted history and the Baltimore of Coates’ youth. The controversial death of Coates’ friend at the hands of police serves as one of the book’s primary narratives.

Author Jenny Lawson’s work has been described as brutally honest and sharply funny. A native of Texas and an influential blogger, Lawson chronicles her experiences with anxiety and depression along with obsessive-compulsive behaviors and attention deficit in Furiously Happy. Its 350 pages offer a patient’s perspective of everything from being bundled up in fear to buried in bureaucracy. Seeing mental health as far more common than actually diagnosed, and more deeply entrenched in everyday disguises, Lawson finds much to laugh about, even in the dark.

The Argonauts by Maggie Nelson

Love and gender identities are explored in Maggie Nelson’s textured memoir, challenging the formulaic structure of what is socially acceptable in a traditional family. Her romance with sculptor and video artist Harry Dodge serves as the framework for Nelson’s storytelling. Helping raise a stepdaughter while still coming to grips with her own sense of love and connection helps define and even blur her preconceived views. Nelson’s work has been praised for intellectually reflecting “the joys of queer family-making.”

The Body Keeps the Score: Brain, Mind, and Body in the Healing of Trauma by Bessel van der Kolk

Psychiatrist Bessel van der Kolk takes a whole-body approach to trauma healing and the differences it means for real people. A world-renowned posttraumatic stress specialist, van der Kolk says traumas large and small impact almost everyone, directly or indirectly. The book charts decades of research and clinical work with trauma survivors and examines how such events can rewire the brain, altering personalities and behavior. The author uses case studies and personal stories to show the changing paradigms in behavioral health.

The Brain Fog Fix: Reclaim Your Focus, Memory, and Joy in Just 3 Weeks by Mike Dow

Dr. Mike Dow explores the chemical shortfalls becoming common to the human brain and the causal effect such deficiencies may bring about. From everyday forgetfulness to more severe cases of ADHD, Dr. Dow finds a link that also hampers people’s everyday moods and optimism. A regular on the Dr. Oz show, psychotherapist Dow’s 3-week program is aimed at programming the mind to naturally maintain proper brain chemistry for optimal results and healing.

Depression and bipolar controlled Suzy Favor Hamilton’s hidden reality for years, even as she successfully trained for Olympic glory. When a misdiagnosis and subsequent new medication exasperated her condition and led to hypersexuality, Hamilton began chipping away at her seemingly perfect life and marriage, and eventually began working the Vegas strip as a high-priced escort. The book details her history, her exposure, and the uphill battle she fought to regain her identity.

NeuroTribes: The Legacy of Autism and the Future of Neurodiversity by Steve Silberman

WIRED reporter Steve Silberman takes a thorough look at the misperceptions, misnomers, and misdiagnoses that have hampered autism research and the public’s hazy understanding of a growing condition. From the earliest days of identifying its grip to more recent efforts at defining and treating symptoms, Silberman confronts the decisions of early researchers who played a role in concealing autism’s existence for more than half a century. Along the way, Silberman highlights the movement of “neurodiversity” and the inherent rights of people with cognitive differences.

SuperBetter: A Revolutionary Approach to Getting Stronger, Happier, Braver and More Resilient by Jane McGonigal

A game developer by trade, Jane McGonigal’s life was sidetracked by a concussion that hampered everything she loved. Bedridden and experiencing severe depression, she slowly found her way back through the power of games, exploring how they can help the mind and body regulate emotion, optimism, and determination. Described as “a proven game plan for a better life,” SuperBetter focuses less on winning and more on skill, method, and perseverance.

Blackout: Remembering the Things I Drank to Forget by Sarah Hepola

Salon.com’s essay editor Sarah Hepola takes an honest look at alcohol addiction and the defense mechanisms used to hide its effects on personal and professional lives. Understanding blackouts is closely covered, along with alcohol’s seemingly downplayed side effects against more illicit substances. Hepola balances humor with humility, taking a tough look at the person she buried in her blackouts, but bookended in optimism and hope.

My Lobotomy by Howard Dully and Charles Fleming

Abandoned by his family less than a year after receiving an ice pick lobotomy from the notorious Dr. Walter Freeman, Howard Dully’s work chronicles his attempt to reclaim his life. Only in his forties did he begin to explore a better path, having spent years self-medicating with alcohol or locked up for petty crimes. The book has been praised for its chilling look at a darker chapter in mental health treatment, when normal adolescent behaviors were justification enough for destroying a mind and discarding a lifetime of potential.

Inside the Dementia Epidemic: A Daughter’s Memoir by Martha Stettinius

Martha Stettinius had already become a well-known advocate for Alzheimer’s patients and their family members long before publishing her experience caring for someone with the most common form of dementia. Understanding dementia’s everyday challenges is at the heart of her work, designed as a helpful road map for those struggling to maintain consistency and optimism. She points out deficiencies in dementia care, including too few educational resources for family members and loved ones and a public perception frequently deprived of hope.

Moody Bitches: The Truth About the Drugs You’re Taking, the Sleep You’re Missing, the Sex You’re Not Having, and What’s Really Making You Crazy by Julie Holland

Dr. Julie Holland’s observations of mental health conditions in the pharmaceutical age have been known for sharply examining what she sees as inherent madness often present in a system built on improving health. Taught to bury her natural moods from an early age, Holland examines gender expectations and the role they play in deterring proper diagnosis and treatment, often stifling personal potential. She labels the good and bad of different methodologies and how suppression only serves to prolong an issue.

The Brain’s Way of Healing: Remarkable Discoveries and Recoveries from the Frontiers of Neuroplasticity by Norman Doidge

Neuroplasticity, or the brain’s ability to change its structure and functionality in response to experience, is at the root of Dr. Norman Doidge’s work. The psychiatrist and bestselling author’s 2015 release has been labeled as one of the field’s more groundbreaking books in decades and was described as a “book of miracles” by The Guardian. Natural and non-invasive options for real recovery are Doidge’s touchstone, seeking real-world applications built around a better understanding of the brain’s capacity to heal.

The Future of Mental Health: Deconstructing the Mental Disorder Paradigm by Eric Maisel

Psychotherapist Eric Maisel explores efficacy in the field of psychotherapy and its changing markers of success. Over-diagnosis is a repeating theme, one in which Maisel finds bureaucracy and indifference playing too common a role in determining severity and methodology. Seeking to inject more humanity into the process of therapy and treatment, Maisel looks for alternative ways to impact lives for the better.

The Man Who Wasn’t There: Investigations into the Strange New Science of the Self by Anil Ananthaswamy

Extensive interviews with patients and health care professionals alike form the basis for Anil Ananthaswamy’s exploration of the human sense of self. Breakthroughs in the understanding of how memories impact a person’s narrative and reality are highlighted, including new approaches by neuroscientists to harness such knowledge for real change. The book offers a glimpse at existential truths for both caregivers and the people they care for, as well as the stumbling blocks that hinder advancement and leave too little room for hope.

Note: This page contains at least one affiliate link for the Amazon Services LLC Associates Program, which means GoodTherapy.org receives financial compensation if you make a purchase using an Amazon link.