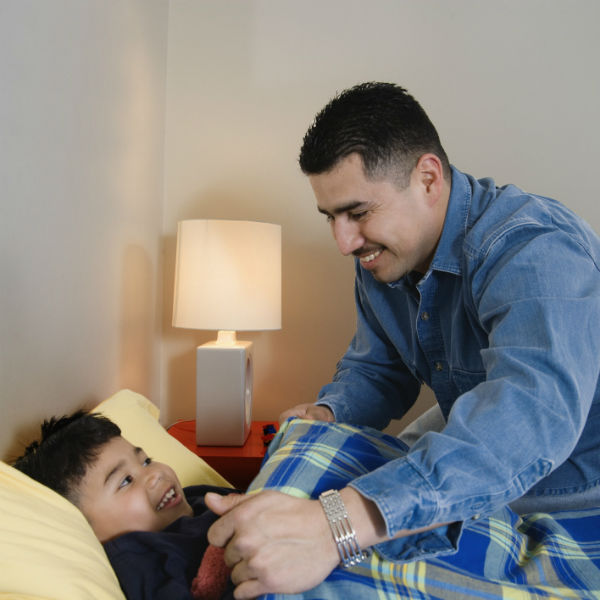 “How can I increase my husband’s involvement?”

This is a question I get so often in my office, I thought I’d address it here. As I began writing on the topic, I decided I needed a male perspective. So this morning, as my husband Joe and I were sitting on our back porch drinking coffee and watching our son—who is autistic—swim in our pool, I picked his brain.

During our 19-year marriage we have made a lot of mistakes and learned a great deal. This was a conversation we couldn’t have had 10 years ago without arguing. We’re even writing a book about it.

There were four main pieces of advice that Joe and I came up with during our chat.

Understand the Dynamics of the Relationship

When I first asked Joe the question, “How can wives encourage their husbands to be more involved in day-to-day life with autism?” he came back with the question, “What is it they need to be involved with? What is the wife not happy with and why? If a husband is disengaged, there is a reason.”

All good points. It really comes down to considering the dynamics of the relationship. When one has a stronger personality than the other, it affects the relationship—for better and for worse. In our marriage, for example, I am the researcher, the doer, and the shaker. My husband is more of a thinker who sees the big picture but not so much the details. We spent too much time trying to make the other person more like ourselves. Once I realized that my strong personality and style of communicating was hindering his ability to get more engaged, we could change the dynamics.

Deal with Your Own Stuff

In order to survive as the parent of an autism-affected child (or as a parent in general, for that matter), dealing with one’s own “stuff” is crucial. Often, disengaged dads are either still grieving or can’t figure out where they fit in because of self-esteem issues, confidence struggles, or just plain sadness. Moms will complain, “He’s not doing enough!” when often they are frustrated because they aren’t taking time for self-care. I often use the example of filling your own cup so that you have something to give to others. When we don’t take the time we need to fill our own cups, we tend to take it out on the ones we love or break the proverbial empty cups over the heads of our loved ones.

My husband admits that when our kids were little, he didn’t know how or in what way to contribute. I breastfed both babies and stayed home with our kids the first five years of their lives, so when he would come home from work tired and sit down to watch television, I would get resentful. To remedy this, we came up with a solution (with the help of a professional counselor). We decided that he would be in charge of baths and bedtime. For me, it meant I had time to do other things, such as go for a walk, or if it was one of those several-tantrum days for my son, I would help.

Joe had to hold up his part of the bargain by starting at a mutually decided-upon time, and I had to back off (i.e., not correct, instruct, or get mad if he did it differently than I did). It was a challenge for both of us, but it made a huge difference in Joe’s feeling more included and needed, and in my feeling that I wasn’t alone.

Joe also told me that men need a lot of encouragement, just like our kids. This, he said, is important because dads often feel helpless in a situation they can’t fix. When dads feel that what they’re bringing to their family has worth and value, they will do it more.

Look at Your Own Behavior and How It May Be Contributing

We get nowhere when we spend all of our time finger-pointing with someone with whom we are trying to work things out. Even when it is the other person’s behavior that seems to be contributing more to an unhealthy dynamic, there’s always something we could be doing differently ourselves. A moment that sticks out in my mind happened years ago when my husband and I were seeing a marriage counselor. I was complaining about the things I had to do and how he never helped with them, to which he turned to me and calmly replied, “You don’t let me.” Point taken. He was right. I had fallen into a position of martyrdom, where he couldn’t really help even if he wanted to.

Was my point valid? Yes, of course. But his was, too. Both were correct. I needed him to do more, and he needed me to let him. Micromanaging kills a person’s ingenuity and ability to problem-solve. When we started taking responsibility for our own contributions, the situation changed and we were both happier.

Even if you’re living with someone who won’t change what they’re doing, won’t look at their part, or refuses to attend a counseling session, there’s something you can do to change the dynamic. Remember, above all, that when it comes to parenting, you’re a team. Stay focused on the goal, which is not to be right but to raise great kids. Being a parent of a child on the autism spectrum is hard, so be sure to seek professional help when needed.