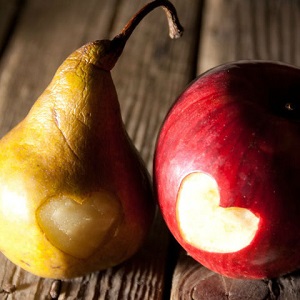 Flora was proud of herself. Her stomach felt flatter. Her new diet and exercise regimen was paying off. She ate things she liked and found exercises that fit in with her energy levels—not the self flagellation she inflicted on herself in the gym the last time she tried to lose weight. She was amazed at how easy it was to follow her program, and how much she was enjoying it.

A couple of weeks into the project Flora was part of a decision making team at work. There were disagreements and heated opinions flying around, making her feel uneasy. She wanted to let them know what she thought but couldn’t fight her way into the conversation. She didn’t want to be the center of attention by yelling her way into the debate. Nor did she want to be ignored.

Suddenly, Flora sensed something was missing. She grabbed a pillow and put in on her abdomen. What a relief! At that very stressful moment Flora missed the ‘padding’ that her fat had provided. The cushion smothered her conflict, removing the need for making a choice. Driving home she felt annoyed that no one had invited her to comment or made room for her opinion. Demeaned and diminished Flora’s anger frothed up. She stopped at a store and bought a quart of vanilla ice-cream and a large bag of corn chips.

The Payoff of Emotional Eating

Flora may have lost the diet battle but she won the war of emotional control. Her rage was a delayed protest at being choked off in the meeting. It felt like a ball of sharp nails stuck in her mouth that couldn’t be digested. Chewing and tasting it would tear up her insides and make her bleed. It had to be anesthetized with ice-cream and chips. So what if she gained back the 10 pounds she worked so hard to shed? At least she didn’t have to deal with the storm of fury that threatened to obliterate her sense of self.

But there was an even better payoff. Sealing off her feelings in an industrial strength freezer bag means that there were no disgusting leaks. Flora wasn’t weak or needy—the twin towers of terror. No one would want to be with her if her feelings oozed out, least of all herself. Logic and rationality were the only winning strategies. The earned self-respect and admiration was the best meal ever!

Each time Flora traded uncomfortable feelings for a shot of strength, she gave a powerful message to the people in her life. She said, “I am made of steel. I can take all your whining, selfishness, love with strings attached, and melt downs.” Better to make her feelings into bad guys and murder them, than stand her ground. She couldn’t afford to upset the people in her life and risk being an outcast.

Flora made herself into a tough bottomless pit for everyone else’s debris. She was bloated with her own undigested emotions and other people’s sewage. Keeping it all in was a badge of honor. Emotional constipation was her sign of strength and resilience. Her body took on the job of dealing with the massive amounts of gunk by converting the trash into fat. Her weight went up and stayed up, despite her valiant efforts with personal trainers, fitness gurus, nutritionist, and weight loss support groups.

Flora the Fat Girl is Better than Flora the Bad Girl

During the first few months of psychotherapy Flora described her experience of eating in the context of family relationships. Eating and pleasure were strangers. Meal times were either a chore, a lonely experience, or a punishment. Young Flora often had to make her own lunch, and take care of her evening meal while her mother was away. At grade school she was considered the model child from a divorced family. She survived by turning up the volume on being the best ‘grown up’ child and muting her feelings of helplessness, neediness, and fear of being alone. There was no reliable person to lean on. An inner steel container was built, fast, to lock up those big scary powerful feelings.

Flora’s mother fell to pieces over every little thing, so Flora protected her mother by keeping her worries and fears to herself. Flora added several more layers onto her tough and limitless container to hold her mother’s emotional gunk. Two dumping-lots of muck rotted and festered, accumulating poisonous properties with no opportunity for detoxification.

As a preteen she lived with her father and stepmother who disapproved of her having her own opinions. Flora learned to stuff her feelings in order to survive. Flora, the fat child, was born. The fat became her armor. Family members ridiculed Flora the fat child, not Flora the ‘bad’ child. The fat took the piercing blows, protecting Flora’s fragile personality.

Often she would be left alone at the table to finish her food, making her feel punished for saying something wrong. She had to murder her own individuality to receive acceptance and care from her family. The sadness, frustration, outrage, and loneliness was squashed. Flora began to hide food in her bedroom and binge when she was alone and safe. At those times food was a comforter. Secret gorging kept the feelings from exploding, it comforted the scared girl.

As an adult Flora repeated those abuses on herself by murdering her feelings in order to maintain relationships that were important to her.

Flora’s struggle may appear to be with her physical weight. Her real struggle is with weight that represents the unbearable aspects of life and the weight that comforts and shields.

The protective armor of weight:

Flora’s euphoria at dropping the pounds quickly faded when she felt vulnerable to awful feelings of weakness or explosiveness. When the armor of fat was needed, the diet had to be aborted. Flora was left with an intolerable choice: Should she focus on feeling physically attractive by losing fat, or feeling emotionally protected by keeping the fat? Either way, she had to abandon one part of herself—a no win situation.

With continued psychotherapy Flora found a safe place where she began to loosen her emotional muck and get rid of her constipating experiences. She experimented with expressing herself, without fear of losing her therapist. Her messy feelings were accepted, understood, detoxified, and digested. She used the nutrients from the therapy to build her emotional muscles.

She learned how to set up effective boundaries that allowed her to receive and give support, without having to seal up and freeze her feelings, or explode and feel ashamed. Along the journey, Flora tuned into her hunger pangs, learning to be mindful of when they came up. She learned that a craving for ice-cream and chips meant she had some yucky feeling to digest.

Mutual exchange in the therapeutic dialogue, in conjunction with artistic expressions, honored her need to feel capable and strong. Unsatisfying meetings with family and friends that once led to gorging, changed to releasing her disappointments and fears after tasting and chewing them. That made room for Flora to prepare for re-configuring relationships without the risk of loss. It also helped her make new relationships where she was not a doormat, and didn’t have to hide her individuality.

Flora worked hard in her therapy. She found a way of accepting and expressing all parts of herself equally. Her eating patterns followed suit. In therapy she digested the emotional weight she had been carrying. As she found room for all parts of herself to be appreciated, she no longer needed the fat to be her armor. She lost weight and did not put it back on. As her emotional life stabilized, so did her body weight. Flora had a new relationship to food, because she found emotional sustenance with her therapist, and then allowed herself to find similar sources of nutrition with other significant relationships. All parts of herself were allowed to get attention. Flora was in balance and her body responded.

© Copyright 2008 by Jeanette Raymond. All Rights Reserved. Permission to publish granted to GoodTherapy.org.