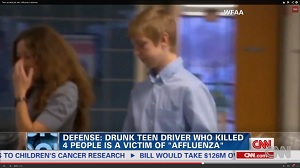 On Tuesday, December 10, 2013, Ethan Couch, a 16-year-old in Fort Worth, Texas, was given his sentence for intoxication while driving and manslaughter of four people: 10 years probation and intensive inpatient therapy. Seem lenient to you? Defense witness psychologist Gary Miller cited “affluenza” as the condition behind the boy’s crime, and apparently, it worked. No jail time for Ethan.

The crash occurred on the night of June 15, when Couch was reported to have been on his way to Walmart with friends to get more beer. Reports say they had stolen beer from the same store earlier that night. When returning to the store, Couch’s speeding pickup truck plowed into four people standing on the side of the road and took their lives. His blood alcohol was 0.24, three times the legal limit for an adult, and he also had Valium in his system.

The defense built their case around Couch’s experience as a child of wealth and privilege. They argued that Couch’s parents were to blame, as they had let him get away with whatever he wanted. Allegedly, Couch was allowed to drive at 13 years old and drink at a young age, too. At 15, he was ticketed by police for being passed out in his truck with an undressed 14-year-old girl and no consequences were doled out at home, which fueled the boy’s progressively irresponsible behavior—or so the defense claimed.

They argued that Couch was “emotionally flat and needed years of therapy” (Douglas, 2013), and their recommendation was an intensive rehab program in southern California that costs $450,000 per year—a price Couch’s parents are able and willing to pay. Currently, Couch is being held at a detention center and is unable to see his parents; but if all goes as planned, he will be sent to the treatment facility soon. Understandably, this has sparked quite a bit of controversy as it raises important questions about wealth, privilege, and the criminal justice system.

Therapy for the Rich and Incarceration for the Poor?

Though it may sound like a made-up term, affluenza is touted as a social condition; in 2005, Professor Clive Hamilton and Richard Denniss even published a book on the subject titled Affluenza: When Too Much Is Never Enough. Affluenza is described as an affliction of the wealthy marked by an inability to link consequences to actions due to the privilege afforded by having “too much.” However, affluenza has not been widely researched or accepted in the mental health field, and the American Psychological Association does not recognize it as a diagnosis.

The question, then, is why this particular judge accepted the circumstances surrounding Couch’s affluenza as a plausible defense for killing four people and maiming others while intoxicated. Plenty of minors who do not have wealth and privilege as an excuse go to prison for similar or far lesser incidents—over 130,000 each year in the United States (Aizer and Doyle, 2013).

And if being a wealthy teenager is justification for requiring therapy as opposed to jail time in the wake of such a devastating crime, then why is the same “privilege” not afforded to teenagers in impoverished families when they commit crimes that result in injury or loss of life to others? Finally, if Couch does, in fact, bear psychological wounding as a result of the parental neglect that the defense claimed comes from being too privileged, then doesn’t it follow that doling out a privileged sentence only reinforces this sense of being above the law and immune to consequences?

On the day of the sentencing, the victims’ families shared feelings of wanting to see Couch do at least some amount of jail time (Douglas, 2013), and perhaps the experience would have served him well. Or maybe the defense and the judge are onto something; research has shown that a better approach is needed to dealing with juvenile offenders than incarceration. A study published in June 2013, which examined the cases of over 35,000 juvenile offenders in Chicago, Illinois, over a 10-year period, suggests that placing teenagers in prison results in significant decreases in high school completion and increases in adult incarceration (Aizer and Doyle, 2013).

There are efforts underway in Georgia and other parts of the country to reduce the number of adolescents sent to prison; however, this phenomenon, known as the school-to-prison pipeline and largely associated with low-income and minority youth, has yet to be addressed in any large-scale way. Intensive in-patient treatment may very well be the answer for teenage offenders, but the problem remains that treatment facilities such as the one cited in Couch’s case are neither accessible nor affordable to the majority of the country’s youth based on cost alone.

Therapists, please weigh in: Do you think “affluenza” exists? If so, is it a mental health issue than can or should be treated by therapists?