5 Defense Mechanisms That Both Protect and Hurt Us 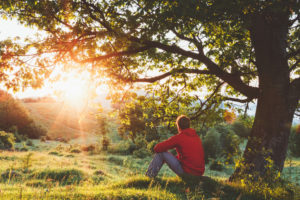 Every day, we are bombarded by situations, people, and feelings that have the potential to stress us out. We all have our own ways of dealing with this stress. Some of them are helpful, others not so much. Stress is complicated and highly personal to the individual who experiences it. Consider what makes you feel stressed out. Have you known other people who aren’t bothered by your stressors and seem to deal with them without much fuss? Do you know people who stress out about things that would never occur to you be a problem? Stress is all about perspective.

The reason people react differently to the same stressor has to do with their experiences. Stress is brought on by triggers or situations/people/emotions that you are particularly sensitive to because of things that have happened in your life.

Take anger, for example: A person who was raised in an unpredictable environment in which anger caused yelling, intimidation, or physical violence will likely react differently to anger than someone who was taught to express anger in a healthy way. Both people may experience a partner being angry with them, but only one of them is likely to be triggered. Another example is infertility. Someone who is struggling with fertility issues may react very differently when they find out a friend is pregnant than someone who conceived naturally. Learning of someone else’s pregnancy may trigger their anxiety, grief, and powerlessness related to infertility.

You can imagine there are infinite ways individuals are triggered because there is a such a diverse array of circumstances that affect human beings. In addition to the diversity of triggers that exist, there is a broad spectrum of ways people react to their triggers. People tend to develop defense mechanisms, or unconscious reactions that protect them from the pain of their triggers. It is common to be unaware of the presence of these defense mechanisms as well as when they are in use. Many of us have heard or used the term “become defensive” when we feel that someone is trying to protect or defend themselves in an argument instead of listening to the opposing point of view. This often happens when a person is triggered by the subject matter. Even after the trigger has passed, the defense mechanism remains and may impact relationships and work.

As a therapist who works with women and LGBTQ+ individuals with anxiety, trauma, and body image issues, I see my share of defense mechanisms that come out during the course of a therapy session. A therapist is trained to identify and help people work through these defenses, which is critical in making progress on whatever issue brings them to treatment.

There are many different types of defense mechanisms, but the following are five common ones:

Regardless of how emotionally healthy we are, we all have defense mechanisms at play every day.

Again, these behaviors are usually unconscious and people are generally not aware they are engaging in them. Regardless of how emotionally healthy we are, we all have defense mechanisms at play every day. Concerns develop when the defenses negatively impact a person’s life in a significant way. A qualified therapist can help you build your self-awareness, heal past pain and/or trauma, and get you coping in a healthy way with any triggers that come your way.