Vaping and E-Cigs: A New Addiction for a New Generation 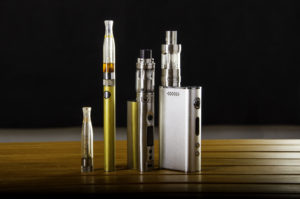 Vaping refers to the process of using electronic cigarettes (also known as e-cigarettes, vapes, vape pens, or ENDS). Since 2007, when e-cigarettes began appearing in the United States, vaping has become fairly common.

Many believed e-cigarettes to be harmless, but as vaping has increased in popularity, news reports of vaping-related illnesses and deaths have also increased. In October 2019, the Centers for Disease Control and Prevention reported a total of 1,080 cases of lung injuries linked to vaping in the United States. They also reported 18 vaping-related deaths.

E-cigarettes have become popular among teens and young adults in particular. According to the same CDC statistics:

Some people simply enjoy the taste of flavored e-cigarettes. Others may use them as a less harmful alternative to cigarette smoking. According to Johns Hopkins Medicine, while it is true that e-cigarettes generally don’t contain as many toxic chemicals as traditional cigarettes, they’re still not great for your health.

The term “vaping” refers to the “vapor” produced by e-cigarettes. This vapor, which e-cigarette users inhale, comes from liquid heated inside the e-cigarette. Some assume it’s just water vapor, but in fact, it is an aerosol. In other words, the vapor is made up of very fine particles of the substances contained in the liquid. If the liquid contains toxic chemicals, so does the aerosol.

E-cigarette liquid and vapor could contain the following chemicals:

In a September 2019 press release, the CDC suggested vaping THC products could be particularly dangerous, though experts continue to investigate the exact cause of the illnesses. Research supports the link between vaping THC and health issues. After interviewing 578 people who had become ill after vaping, the CDC found most had vaped THC products.

E-cigarette use involves the direct inhalation of vapor rather than the direct smoking of a substance. No smoke is produced, and since they don’t contain tobacco, they don’t produce any tobacco smell. Because of this, many users find vaping more appealing and believe it causes fewer, if any, harmful effects.

What’s more, medical experts have linked the chemicals in e-cigarettes to a range of health conditions, including:

As evidence linking THC in e-cigarettes to illness and death emerges, medical experts continue to advise against using e-cigarettes, especially e-cigarettes containing THC. Since e-cigarettes might, in theory, contain any chemical, people are encouraged to use extreme caution when unsure of exactly which substances they’re vaping.

Even teens who do know e-cigarettes contain nicotine may not realize they’re addictive or that they can have serious health effects.Research also suggests e-cigarettes can function as a “gateway drug” to cigarette smoking and other tobacco use. The risk is especially high for teens and young adults who might not have started smoking otherwise.

Some people may look to e-cigarettes as a way to ease themselves out of smoking. However, the research on this strategy is mixed. One study suggests e-cigarettes work as well as other nicotine replacements such as patches or gums. Another study found most people who used vaping to quit nicotine ended up smoking both traditional and electronic cigarettes. The FDA has not approved of using e-cigarettes as a smoking cessation tool.

Why Is Vaping So Popular Among Teens?

An annual survey from the National Institutes of Health found that vaping increased among high school seniors by 9% between 2017 and 2018. The research found increases in vaping across several substances: nicotine, marijuana, and hash oil, as well as flavored e-cigarette liquid.

Experts point to a few key reasons that help explain why many teens find vaping appealing.

First, e-cigarette marketing often involves advertising methods like animation, bright colors, and youthful actors, all of which seem designed to attract teens and young adults. Ad messages also often appear to suggest vaping is linked to increased popularity and happiness. E-cigarettes also come in a range of flavors, which can make them seem more fun and enjoyable to younger people.

Lack of education on e-cigarettes can also further the mistaken belief that vaping doesn’t have any serious effects. Many teenagers don’t know much about e-cigarettes. Some aren’t aware they contain nicotine or other substances, and many believe the vapor contains nothing more than flavor. Even teens who do know e-cigarettes contain nicotine may not realize they’re addictive or that they can have serious health effects.

Teenage vaping addiction is a growing health concern. Research has yet to determine the full effects of vaping on the brain and body, but experts believe it can have a particularly harmful impact on teens.

The brain continues to develop throughout the teen years, and while it’s still developing, teens face a higher risk for addiction than adults. Vaping during the teen years also has the potential to permanently affect brain development.

If you believe your teen is using e-cigarettes, these tips can help you start a conversation and get them help, if necessary.

Medical science still has much to uncover about e-cigarettes, but recent news reports highlight a number of recognized concerns. E-cigarettes may involve fewer health risks than tobacco cigarettes, but that doesn’t mean they’re healthy. They may pose even more dangers to teens—an age group in which e-cigarette use has recently increased.

A compassionate therapist can support you in the process of quitting e-cigarettes or any other addiction. Begin your search today!