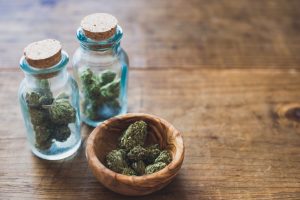 Medical marijuana refers to the use of the marijuana plant, cannabis, to treat a disease or its symptoms. Though not yet recognized by the Food and Drug Administration (FDA) as a medicine, marijuana has been shown to be helpful in the treatment of a number of medical conditions and has gained popularity in the United States as an alternative treatment over the past few decades.

Medical marijuana can be smoked, vaporized, taken in pill form, or added to food for consumption.

Although many people believe marijuana to be a solely recreational substance and may associate its use with a certain type of lifestyle, a number of sources have shown that it has in fact been used in medicine for thousands of years. In ancient China and other civilizations, marijuana was mixed into teas for the treatment of pain and illness. During the Middle Ages, marijuana was widely used in the Middle East as a traditional medicine. Spanish settlers brought marijuana to South American in the 1500s.

It is believed that Mexican immigrants introduced the drug to the United States in the early 1900s. During the early and mid-1900s, many states passed laws prohibiting the use of marijuana and other drugs. Despite the longstanding medicinal use of marijuana, the 1970 Controlled Substances Act classified it as a Schedule I drug with no accepted medical use. In 1978, New Mexico became the first state to pass a law recognizing the medical value of marijuana, and over the next few decades, many other states did the same. Currently, 28 states and the District of Columbia allow the use of marijuana in the treatment of certain medical conditions.

Marijuana contains the main ingredient delta-9-tetrahydrocannabinol (THC) as well as over 100 other cannabinoids, or chemicals. The two cannabinoids that have been most widely used for medicinal purposes are THC and CBD. THC has been shown to stimulate appetite and reduce nausea, while CBD may be useful for reducing pain and inflammation and may also lead to improvement of certain muscle control problems.

Medical marijuana can be used to treat symptoms of many different physical illnesses and symptoms, among them:

It has been extensively supported as a form of pain management, when pain is unresponsive to standard treatment and medications. Further, medical marijuana has been used for the treatment of nausea, vomiting, and appetite loss that results from chemotherapy treatment and other medical issues.

The medical use of marijuana is an area of continuing study. Recent studies suggest that marijuana extracts may help kill or reduce the size of certain cancer cells, and there is increasing interest in the use of CBD in the treatment of childhood epilepsy.

Research on the use of medical marijuana for the treatment of mental health concerns has yielded results that are somewhat mixed. While some research has found marijuana shows promise as one approach to the treatment of posttraumatic stress, depression, anxiety, schizophrenia, and certain other mental health conditions, other research suggests that the use of marijuana may be potentially harmful, in some cases.

Frequent or heavy use of marijuana in adolescence has been linked to the development of anxiety in adulthood, for example. Some research has also shown that regular marijuana use may increase the likelihood of a person experiencing a psychotic episode.

A team of researchers at the University of British Columbia believes marijuana may be useful in the treatment of addiction as a replacement for opioid use.

Medical marijuana as a treatment for mental health issues is an area of emerging research, and further study is needed to better understand the benefits and risks associated with medical marijuana.

Controversy Regarding Marijuana Use

Because marijuana is still a Schedule I controlled substance, it is difficult to accurately study its effects. Much of the research has been done on people who use marijuana for recreational, rather than medicinal, purposes. In addition, the Drug Enforcement Administration (DEA) has authorized very few sources to provide marijuana for the purposes of research. Over the past few years, however, the DEA has relaxed some standards to allow for more FDA-approved clinical trials.

Unlike other medications, medical marijuana is not regulated by the FDA. Though the marijuana products available in dispensaries may tout certain benefits, many of these claims may be unsubstantiated, and consumers cannot be certain of what a particular product contains and what specific effects it may have. If further research supports the efficacy of medical marijuana, the FDA may begin to regulate its sale and use more closely. For the time being, those who live in areas where the use of marijuana is legal may wish to exercise caution when obtaining it.