Scrutinizing the ‘Selfie’: Self-Confidence or Self-Obsession? 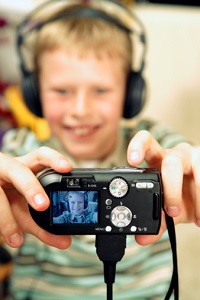 Celebrities do it, regular folks of all ages do it, and several articles and blog posts have been written discussing and analyzing the fascinating trend that is the selfie. It’s a word that has become synonymous with social media, self-love, and in some cases, shocking levels of self-obsession. Justin Bieber, a pop star and trailblazer in the selfie stratosphere, is currently backing a new camera app called “Shots of Me,” which is devoted entirely to the ongoing proliferation of the selfie. And the Oxford Dictionaries Online officially dubbed “selfie” 2013’s Word of the Year.

In case you’ve managed to remain unfamiliar with the term, the selfie consists of any photo taken by the self, of the self, and then posted online, typically via social media sites like Facebook and Instagram. It’s the modern-day self-portrait, and anyone who has access to a camera and the Internet can partake. Over 31 million photos tagged with “#selfie” have been posted to Instagram to date (Walker, 2013), and according to a “nationally representative” report by the Pew Internet & American Life Project, teens are especially caught up in the selfie hype. Approximately 91% of those surveyed have posted at least one selfie (Madden et al., 2013).

Considering the very nature of social media is largely self-focused, with profiles catering to personal descriptions, interests, status updates, photos, and pretty much whatever else a person feels inclined to reveal to the masses, it doesn’t come as a huge surprise that selfies have become so popular. But their prevalence still begs the question: Why are people so obsessed with snapping photos of themselves and posting them online—and what does this say about those who do it?

Many theories have been shared regarding the widespread popularity of selfies, as well as the context in which some of them have been taken. Some take a more positive slant than others.

An article on Slate.com suggests that “selfies are good for girls,” as they encourage young girls, in particular, to be proud of who they are (Simmons, 2013). Author Rachel Simmons posits that despite the many advances in gender equality, many young girls still grow up with the understanding that being submissive and humble are desirable traits and that to have self-confidence is often seen as being conceited. In contrast to this, the selfie empowers females to celebrate not just their looks but also their accomplishments by shooting “tiny bursts of pride” into cyberspace, thereby encouraging other young women to do the same.

In a New York Times article, Jenna Wortham writes that the selfie is merely a mode of self-expression, and a means of communicating and connecting with others (2013). She also touches on the empowering nature of the selfie when she describes an old black-and-white photo she procured in an antique store of “a female pilot on a mountaintop,” in which the camera is most definitely being held by the woman in the photo.

Wortham stumbled upon a selfie taken decades before the word officially existed, which shows the longstanding human desire to capture ourselves in our moments of personal satisfaction and triumph, with or without the Internet.

Others, however, view the selfie as a much more problematic reflection of where society stands with regard to self-obsession and sexual objectification. A recent article on Jezebel.com describes them as a “cry for help” (Ryan, 2013).

“Selfies aren’t empowering; they’re a high tech reflection of the… way society teaches women that their most important quality is their physical attractiveness,” writes Erin Gloria Ryan. A Teen Vogue article similarly delves into the “unexpected consequences of selfie-obsession” (Walker, 2013) by examining the potential dangers of a person’s sense of self-worth being tied to pictures posted online and the comments that go along with them.

Researchers in the United Kingdom recently reported that overdoing the selfies may also damage relationships, romantic and otherwise (Miller, 2013). Though it can be intriguing to see the person you’re interested in or involved with feeling confident enough to post selfies, it can also be a deterrent if that person posts too many self-portraits online. According to the researchers, friends, family members, and colleagues may feel alienated if an individual appears overly self-obsessed in social media outlets.

Some even post selfies en route to and while attending funerals, a phenomenon so curious it has its own Tumblr blog: selfiesatfunerals.tumblr.com. The site was created by Jason Feifer, who quite simply states in his introductory video, “There’s some things a man should never do at a funeral.”

The funeral selfie trend doesn’t seem to be more popular with one sex over another; one of the photos on the site depicts a teen girl with styled hair and pouty pink lips sitting in an attention-attracting pose. The words underneath her picture read, “You never appreciate what you have til its [sic] gone. R.I.P. Grandpa, you will be missed,” followed by a sad face and a heart.

Much of the discussion about selfies is centered on women and young girls who take them, regardless of the reality that plenty of teenage boys and grown men take them, too. One group of guys posted a YouTube video called the “Selfie Song” (Mippey5 Music, 2013). In it, a handful of young men take selfies in various locations and repeat the chorus, “I’m bored, so I’m gonna take a selfie. I’m obsessed. It’s unhealthy. Click, share. I don’t care that I’m a man. I’m gonna take another pic and I’m gonna post to Instagram.”

And yet, attention remains largely focused on the young girls and women who engage in selfie posting.

In September of this year, Kimberly Hall, a mother and women’s ministry leader in Austin, Texas, wrote a letter on her blog “Given Breath” to the teenage girls who post selfies. Hall expressed obvious disdain for the seductive nature of girls’ photos. “Wow—you sure took a bunch of selfies in your skimpy PJs this summer!” wrote Hall.

Although she has since removed the photo, she originally posted the letter with a picture of her three sons on the beach wearing only their swim trunks. Many readers found the photo highly inconsistent with the content of her post—even hypocritical—and following outcry, Hall replaced the photo with one that showed her sons fully clothed and smiling.

The indignant tone of the letter remains online, however. Hall shames girls who photograph themselves in their bathing suits and bedrooms and reprimands them in the name of the purity of her teenage sons. Hall didn’t mention whether her sons had any male friends who were posting summertime selfies, but considering what we know from teen selfie stats from earlier this year, she probably did see several selfie posts from young men. Were those pictures less offensive or worrisome?

Self-Obsession: Who Are You, Anyway?

Self-exploration and analysis are ongoing themes in social media, life in general, and in the field of psychotherapy. Examining our ideas of self and where they originate is a trademark of traditional therapeutic sessions, in which self-love, self-acceptance, and self-compassion are widely encouraged, and each of these traits requires time spent evaluating and developing a deeper understanding of the self.

But what about when someone is so confident—or confused—that he or she feels compelled to post constant selfies in an attempt to gain approval, attention, admiration, and validation? When does the desire to attain self-acceptance via social media shift into a potentially destructive form of self-obsession?

Studies conducted in previous years have attempted to assess whether Facebook promotes narcissism as well as the extent to which narcissistic traits are connected to low self-esteem (Parker-Pope, 2012; Tucker, 2010). In 2010, using the Narcissism Personality Inventory and the Rosenberg Self-Esteem Scale, psychology researcher Soraya Mehdizadeh measured the Facebook activity of 100 college students.

Mehdizadeh’s findings suggest that those with narcissistic behavior and those with low self-esteem are likely to spend over an hour a day on Facebook, and that those who inflate their own reputations or identity in their photos and status updates may very well be doing so to compensate for feelings of inadequacy. Along these lines, yet another concern surrounding selfies is the extent to which the images can be altered and manipulated to project a person’s ideal identity as opposed to his or her real identity.

A nationwide survey of 1,000 girls between the ages of 14 to 17, conducted in 2010 by the Girls Scouts of the USA, revealed that nearly 74% of those asked believe their female peers use social media to make themselves appear “cooler than they really are.” The survey also shared the view that most young women “downplay” their positive traits like intelligence and kindness on their social media profiles. Instead, what gets the bulk of the attention is physical appearance, as is reflected in the selfie.

Of course, the ability to create an online profile that reflects the ideal versus the real you does have a strangely enticing allure: Create a page devoted entirely to yourself; post photos on that page that reflect exactly how you want to be seen, often with carefully calculated camera angles, lighting, and edits; and share this work of social media art with whomever you  choose. In other words, you are in control of who others think you are, which may or may not be who you actually are.

Ultimately, the reality is that regardless of the authenticity or lack thereof displayed in people’s profiles, social media sites like Facebook and Instagram are well established as outlets for self-expression and social connection, and they don’t appear to be going anywhere any time soon. Perhaps some simply need a reminder to use them wisely and simmer down on the selfies. After all, there are other people who are worth photographing, too.