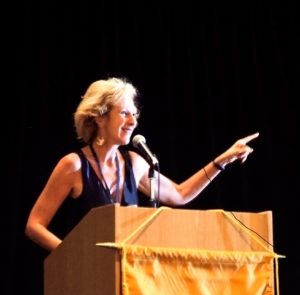 Rational Emotive Behavior Therapy (REBT), developed by Dr. Albert Ellis in 1955, laid the foundation for the cognitive therapies. REBT is often taught in academic counseling programs and its techniques are still used by many therapists today.

Dr. Debbie Joffe Ellis is a licensed psychologist from Australia, a licensed mental health counselor, a presenter and writer, and an adjunct professor at Columbia University in New York City. She is also the wife of the late Dr. Albert Ellis, and she is widely recognized as an expert on REBT. She presents on REBT throughout the United States and abroad and wrote the second edition of the book Rational Emotive Behavior Therapy (2019).

In this interview, Dr. Joffe Ellis answers common questions about REBT and shares her take on its impact.

1. REBT was developed in the 1950s by your late husband, Dr. Albert Ellis. How different and/or relevant is the model today?

REBT is imbued with common sense, wisdom, tools, and techniques for achieving greater well-being, tranquility, compassion, and humor. This approach, model, and framework–as both a powerful and empowering therapeutic approach and also a way of life–is timeless. In some ways it may be more relevant than ever today, when there appears to be unique stresses and challenges impacting people across the globe.

REBT is not essentially different today than it was back then. However, as the person who my husband entrusted to carry on his work, I continue to emphasize–perhaps more strongly–the importance and benefits of gratitude and unconditional acceptance along with REBT’s basic philosophy, tools, and techniques.

2. How does REBT work? Is it evidence-based?

REBT is scientific and evidence-based. Unfortunately, it appears to me that some younger students and professionals in the therapy field may be unaware that REBT heralded in the cognitive revolution in psychotherapy, or may wrongly think that REBT came after cognitive behavioral therapy (CBT) or is a branch of CBT. Those ideas are incorrect.

REBT was first presented to the psychotherapeutic community in the early-mid 1950s. Prior to REBT, Freud’s Psychoanalytic approach dominated the field of psychotherapy. CBT was presented some 15 years after REBT’s presence in the field. Dr. Aaron T. Beck, known as the father of CBT, has often acknowledged Dr. Albert Ellis for the influence of REBT on his work and the inspiration and help Ellis gave him when he was working on his early research on depression and additional areas. Some correspondence between them can be seen in the Ellis autobiography, All Out!. In addition to there being a good amount of evidence-based research on REBT’s efficacy, the research on CBT also validates REBT since CBT is based on the major premises of REBT.

3. You’ve presented on REBT around the world to other mental health professionals. What do you find resonates with other therapists about this approach?

A person working as a mental health professional, or in other professions related to healing, human care, and/or education, is as fallible a human as any individual in other professions, but they may be more prone to professional burnout than people in other professions. Therefore, many of the healing professionals I have presented REBT to connect with reminders or teachings about the importance of self-care; unconditional acceptance of themselves, of others, and of life; the benefits of striving to apply compassion to ourselves; and to “walk our talk” by doing our best to practice what we preach.

Whether applying it to themselves, their clients, or sharing it with friends and loved ones, I hear from other professionals that they enjoy the practicality of REBT and its simplicity, elegance, and humor. The desire for such elements, and enjoyment of them, is universal.

4. How does REBT compare or differ from other models of therapy? What makes it unique in your opinion?

In my view, REBT is the most holistic of all the models I know of. Whilst other approaches contain elements that are seen within REBT, none that I know of contain all of those elements. REBT is no-nonsense, practical, and do-able for vast numbers of people, and as mentioned earlier, it is imbued with compassion. It gives as strong and equal an emphasis on the importance of understanding emotions as it does on the importance of training ourselves to be in the habit of thinking in rational and life-enhancing ways.

REBT is unique in its focus on psychoeducation. In particular, teaching people how to, on their own, distinguish between rational and irrational thinking and between the healthy and unhealthy so-called ‘negative’ emotions. (‘Negative’ in this context does NOT mean bad, but indicates that they may be less pleasant than happy emotions, yet they are enriching and appropriate).

REBT is also unique in that it is both scientific and philosophical. It is humanistic to its core. A number of approaches that came after REBT, including some of those known as “Third Wave Cognitive Approaches,” are based on several of REBT’s principles. And REBT is believed by many to be the original contemporary ‘Mindfulness’ therapeutic approach.

REBT also encourages self-sufficiency and empowerment, and it is an original ‘Self-Help’ approach. In addition to being contained in many forms of therapy, REBT elements can be at the foundation of coaching, executive coaching, and assertiveness training, and can be seen and heard to be enfolded into teachings of a variety of traditional and new age spiritual teachers.

5. What kind of concerns is REBT best-suited to help with?

REBT is proven to be effective in helping people with common everyday neuroses, as well as with complex disturbances and/or personality disorders. For the former group of people, short-term REBT therapy sessions can be marvelously effective, and REBT can become a way of life and living. For the latter group, longer-term help may be needed for successfully achieving therapeutic goals.

6. What advice would you give a person in therapy who is trying REBT for the first time?

The advice, or rather encouragement, that I might give a client in therapy using REBT for the first time might include my urging them to reflect on their lives and the fact that our lives are filled with both probabilities and possibilities. I would encourage them to take time to cherish the power and opportunities they have, and if they choose to embrace and apply them, to craft a marvelous life:

I would remind them that, with ongoing effort, change is not only possible, but inevitable. The choice and power to live a great and meaningful life is both achievable and in their hands!

Find a Therapist Near You

© Copyright 2020 GoodTherapy.org. All rights reserved. Permission to publish granted by The GoodTherapy Team