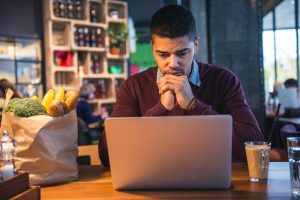 Political anxiety is a term used to describe the recent increase in anxiety many people, regardless of party or political affiliation, are experiencing in the wake of the 2016 presidential election and in the current political climate in the United States. Also referred to as postelection stress, political anxiety is not an official mental health diagnosis but a term that can be used in times of a stressful or divided political climate to reflect the reactions resulting from this turmoil.

People are more likely to experience feelings of anxiety when current events are worrisome, stressful, or otherwise uncertain, especially on a large scale. In the months preceding and following the presidential election of 2016, for example, many mental health providers noted an increase in anxiety in people seeking treatment, both those who had a history of anxiety and those who did not. People reported feeling highly stressed about the election and also experiencing increased fear, anger, uncertainty, and mistrust.

Worry about current events also often leads people to check news and social media sites more frequently out of a desire to stay informed. This increased vigilance may, however, have the unintended consequence of increasing worry and can also lead to insomnia and other issues.

Many believe the experience of political anxiety to be related to the political party an individual identifies with. In a recent poll of more than 3,000 Americans, about 70% of respondents who identified as Democrats reported feeling stressed about the political climate, while only 26% of the Republicans polled felt that way. Some Republicans have reported feeling stressed about being open about their support for Donald Trump out of fear of negative judgement from others or a negative impact on their relationships with others.

Political anxiety may also rise after a disastrous event. Some mental health professionals report the months following the 9/11 terrorist attacks were also marked by increases in anxiety and stress.

Understanding the Increase in Political Anxiety

For some people, political anxiety is related to fears about what will happen under a particular administration. Some may view the administration as unpredictable and dangerous, while others may be affected by the opposition to their own beliefs and ideals. Many worry they will be negatively impacted by new policies or face repercussions when existing policies and laws are overturned.

Minorities in particular report being afraid of the effects of the current administration on not only their ability to work and live freely, but also their personal health and safety. And in fact, hate crimes (crimes motivated by prejudice) rose in 2016 by more than 20% in nine metropolitan areas in the United States and appeared to further increase in some cities after the November 8 election.

The highly divisive nature of a political climate may also be a significant factor in the experience of political anxiety. Even when political issues are not as tense or divisive as after the 2016 American presidential election, people still have a tendency to perceive those who identify with an opposing political party as enemies. In some cases, this may cause strained relationships among friends, partners, colleagues, and family members.

How Can Political Anxiety Affect Well-Being?

Like all types of anxiety, political anxiety can cause a number of physical and mental health symptoms:

Minorities in particular report being afraid of the effects of the current administration on not only their ability to work and live freely, but also their personal health and safety.

Many also experience strained interpersonal relationships as a result of political anxiety or political differences. Relationship conflict can leave people feeling angry and upset with those close to them or misunderstood, ignored, and even isolated from their loved ones.

Policy changes of a new administration can have far-reaching effects. Many individuals in the United States fear impending financial difficulties and the loss of health care after changes to Obamacare took effect. Related concerns might also include eco-anxiety, or fear for the changing environment. These fears can further fuel anxiety and stress.

Left untreated, stress and anxiety can cause serious issues over time. Chronic stress has been linked with serious health concerns such as fertility issues, a weakened immune system, and even a decreased lifespan. Learning to manage all types of anxiety, including political anxiety, so that the concern does not become a chronic issue, can be helpful for avoiding these concerns.

Being politically active is one strategy that can help combat anxiety, as helping contribute to change often provides a sense of self-efficacy and hope while reducing feelings of helplessness. This action can take the form of voting, calling political representatives to make opinions known, participating in protests, joining organizations, or volunteering. Limiting social media involvement can also be helpful for some individuals. While social media can be a good way to stay informed, it can also be stressful, as it often involves heated debates and nasty comments.

Making time for adequate self-care can also help people cope with anxiety and stress. Self-care involves getting adequate sleep, maintaining a nutritious diet, being physically active if able, and making time for hobbies and relaxation, which can include activities such as meditation, yoga, and massage.

Can Therapy Help with Political Anxiety?

Therapy can be helpful in the treatment of any anxiety, including political anxiety. A professional therapy or counseling environment can provide a safe and supportive space for people to process and understand their thoughts and feelings. Many mental health professionals report an increase in the number of people in treatment who have recently been discussing election-related stress in sessions.

Therapists not only provide a compassionate ear, they are also often able to teach coping methods and help people in treatment develop strategies to address affected relationships and improve their overall sense of well-being. When political anxiety interferes with an individual’s ability to function, it may be especially beneficial to consider seeking help from a qualified mental health professional.