‘Who Am I?’: Identity Politics and Family Conflict 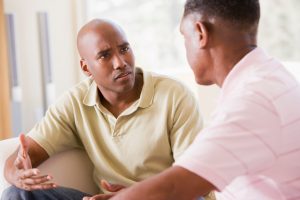 For the first time in over 20 years, the events in the political and social world have entered my consulting room in a way that is not only troubling, but also problematic to address. Anxiety is on the rise. It has been my experience that “identity politics,” the divisions and conflicts that have intensified in our society during and since the election, are creating severe disruptions not simply between anonymous people with differing political affiliations, but more importantly for the work I do, in relationships between family members, friends, and coworkers.

Political pundits and social media describe our social divisions in terms of identity politics: conflicts are occurring between people with different racial, social class, gender, and other social identities. We pigeonhole people, then assign them to polarized identity groups with the choice of identity narrowed to the binary of “us” and “them.” With this binary thrust upon us by political events and social conditions, our human, emotional identities are being erased in our relationships.

In my psychotherapy office, conflicts around identity have emerged as a major focus in therapy sessions. Since the election, I hear a lot of talk about “us” and “them” as I listen to some people talk about themselves and their relationships in the world. One person, Christopher, spoke of a painful Thanksgiving dinner where his father told him, “I’m ashamed of you! How could you vote for that criminal Hillary? You’re not one of us.”

Separately, Liz, someone who assumed I supported the Democratic nominee, was reluctant to acknowledge she supported Donald Trump. Nevertheless, after a haranguing phone call from her mother, who supported Hillary Clinton, she came to her session so full of feelings that she risked talking to me about the encounter. She sobbed as she told me:

“I really didn’t want to bring up the election because I think you’re for Hillary. But I don’t think you’re a fanatic like my mother, and I can’t stand these horrible feelings. I think she hates me. She called me and screamed that I better not vote for Trump. She said, ‘No daughter of mine could be so stupid and ignorant. You’re an embarrassment.’ ”

Identity and Its Development

What, exactly, is identity? It is not a simplistic notion built on who we vote for and social categories such as class, race, and gender. Nor is it just other socially identifying categories: father, churchgoer, ping-pong player, Boy Scout. While it can include all of the above, it is a much more complex notion based on the answer to the question: “Who am I?”

The answer to this question begins to develop in early childhood. The family provides the foundation for the development of a sense of self. When parents mirror their children by reflecting back the child’s thoughts and feelings, the child feels heard and known. This is an important building block in the development of self-esteem, self-worth, and identity. Eventually, as the child separates and individuates from their parents, they begin to define themselves as they construct their answers to the “who am I?” question.

Central to identity and sense of self is an emotional orientation to “who am I?” Thus, I can be proud of what I work at, scared of being a parent, hopeless about success, disappointed about my life, grateful for my opportunities, ashamed, resentful, jealous, loving, hateful, etc. All of these self-states, and many more, comprise my identity.

Ideally, throughout life, we become free to independently reflect on and develop our sense of self as it is constructed in the conscious and unconscious interactions that occur in all our relationships. But not everyone is fortunate enough to grow up with the tools to be able to develop a unique sense of self. Separation and individuation can be compromised by demands to adhere to the family’s definitions of what is acceptable and unacceptable. As a consequence, attempts at self-definition that depart from family norms can lead to uncomfortable and intolerable feelings that interfere with the ability to know who one is and what one wants. Identities that are stuck in family definitions are not fluid, and typically require self-validation from an outside audience.

When the development of identity has historically adhered rigidly to family requirements, one is more vulnerable to seeing identities as inflexible and unalterable. This orientation can lead to viewing the world as the binary “us” and “them.”

With identity politics having a strong impact on many of the people I work with in therapy, I ask myself: “How can I help people like Christopher and Liz shape positive identities and better tolerate their families’ aggression so they don’t have to choose between (1) accepting the shame and rejection from their family for political choices, or (2) possibly severing ties with them?”

Both Christopher and Liz felt under assault by their parents. They were in disbelief that their parents could lash out so forcefully. Christopher was very angry at his father: “He’s so rigid and closed-minded. I can’t have an intelligent conversation with him. I never thought I’d think of my father as a bigot or stupid, but that’s what I’m thinking now. I don’t like these feelings. I keep thinking, ‘Does my mother agree? Am I a bad son?’ ”

I asked Christopher, “What would you like your father to understand about you? He told you that ‘you’re not one of us.’ Is that how it feels to you?”

Christopher thought silently for a few minutes and responded: “I want my father to see I’m still his son. I may have different views about how government should be responsive to people and about women and gay people, but I’m a good human being and I’ve always been a good son. He gets to me. I feel so rejected and ashamed. But I’m angry, too. It’s so confusing.”

I then asked Christopher what he thought his father would say if I asked him what he’d like Christopher to understand about him. At first, Christopher replied he didn’t know. But he thought for a bit and said:

“I guess he’d want me to see he’s not a bigot or a racist. He wouldn’t admit it, but he’s probably scared. My mom’s unemployed, and he hates his job and doesn’t make enough money. He’s getting old, and I suppose he feels pretty powerless. Maybe he wants me to know he’s angry and disappointed about his life. I know I never think about him this way, but I suppose it’s true. Maybe voting for Trump gives him hope. I think it’s crazy, but I suppose he doesn’t.”

Talking with Christopher about his father’s vote for Trump led us to hypothesize about and explore his father’s fuller identity, rather than ascribe the binary identity of Trump supporter. It allowed Christopher to develop some empathy for his father’s hurtful outburst to him on Thanksgiving. It also helped him to think about their different identities beyond “us” and “them.”

In no way does having empathy mean one is condoning or agreeing with the other’s choices. Rather, it opens up the possibility of seeing and relating to the other as a unique, human person, not just a member of a social or political category.

While their political identities differed, Christopher talked about the ways in which he was similar and different in values to his father: “It’s funny. We’re both generous people. He’s more socially conservative than I am, but we’re both churchgoers; we volunteer. He’s a wonderful grandfather to my son. He can be critical with people and was always somewhat harsh and critical with me. I’ve gotten better in not taking on his judgments. I’m still a little prone to being sensitive to criticism. He can lose his temper, which I never do. Still, he’s been a pretty good role model for me in raising my son.”

Knowing this, of course, is not enough to make peace between Christopher and his father. Fortunately, Christopher has individuated enough from his family to have internalized a sense of himself that feels valuable and confident. While he still occasionally is vulnerable to taking on and accepting criticism without carefully considering if it is applicable, for the most part he can maintain his positive sense of self in the face of threats like his father’s Thanksgiving assault.

When Liz and I talked about her mother, a picture of a woman similar to Liz emerged: “We’re both very passionate about things. As a kid, we heard about this woman that was mistreating her animals. Mom and I got very active in getting the animals taken away from her. We both still work for animal rights. When we don’t agree, she can get nasty. I suppose I was pretty scared of her rages growing up. That awful phone call about my not voting for Hillary was a pretty typical communication. I guess I had a pretty typical response. I get angry and scared. I have an urge to comply, which would and wouldn’t make me feel better. But I won’t change my vote. I thought of lying to her about it.”

Liz and I talked more about who her mother was as a person, not just a Hillary voter. Both she and Christopher got the point: their relationships with parents are complex and multilayered, with so much history. Voting for Trump or Clinton is not what defines who anyone is, nor does it have to divide a parent-child relationship into “us” and “them.”

Having empathy, attempting to make sense of another person’s political choices in light of who they are as people, can lead to an understanding and acceptance of the other’s full identity, not the binary identity choice of Trump voter vs. Clinton voter, “us” and “them.” In no way does having empathy mean one is condoning or agreeing with the other’s choices. Rather, it opens up the possibility of seeing and relating to the other as a unique, human person, not just a member of a social or political category.

In my psychotherapy practice, people who have had more success individuating tend to be better able to overcome the anxieties created by the differences between themselves and their family members. They are more able to withstand the bad feelings that can result from being seen as an unacceptable other. When they can develop the capacity for empathy and understanding about their family members’ political choices, the tensions and intolerable feelings between family members may diminish, become more tolerable, and binary thinking can be expanded.

It is my hope that, as a society, we can find a way to be more empathic toward people with opposing political views without constructing binary identities that create what feels like irresolvable conflict and aggression.